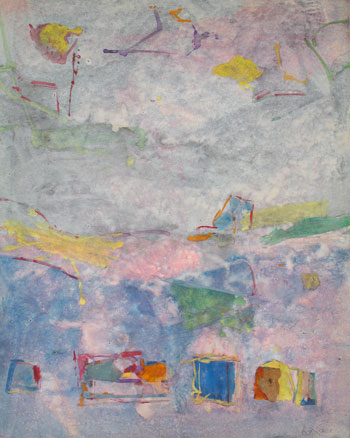 The rediscovery of Saul Leiter’s work in recent years is clearly a major event in the history of photography. From being a fashion photographer known only to specialists, he has become a pioneer of «street
photography» in color.

In 2005 the publication of the book «Early Color» marked a decisive step in Leiter’s new recognition. The Howard Greenberg Gallery in New York also played a determining role by exhibiting his work and encouraging Leiter to work on his archives. In France the publication of a «Photo Poche» book drew much interest, as did the exhibitions at the Fondation Henri Cartier-Bresson and at the Galerie Camera Obscura n 2008.

And yet until now the attention has been on only one aspect of his work. With this exhibition we aim to show for the first time outside the USA, another side of Saul Leiter: his paintings. This exhibition underlines the connections between the photos and paintings, and the ways they interact and influence one another.

Born in 1923, the son of a rabbi in Pittsburg, Leiter was studying theology at university when at twenty-three, irremediably attracted by art, he decided to quit his studies, move to New York and consecrate himself to painting.

A short time later he discovered photography and made his first negatives (black and white) with a Leica in the streets of New York. From 1948 he began using color, obviously under the influence of his painting devote.

Leiter is a rare example of an artist who has always happily practised of photography and painting in tandem, even if his successful career as a photographer has somewhat eclipsed what he considers himself as his «serious» work («Painting is glorious. I like photography, but I am not certain that photography can do what painting can.»).

Probably Leiter will be known to posterity as a photographer, but he would not have been seen as such a pioneering artist, had he not taken such delight in the color that he used as musical raw material in his watercolors and gouaches. Leiter has never made much effort to promote his paintings, but his passion is intact. He continues to paint and recently enjoyed his first important exhibition in a New York gallery known for showing paintings of the «New York School» of abstract expressionism. We are delighted and privileged to show these two facets of Saul Leiter’s work side by side for the first time.