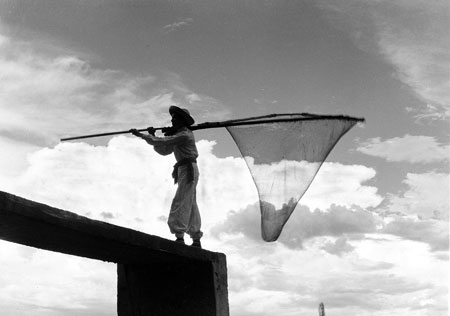 Mucho Sol is the title of one of the few books on the work of Manuel Álvarez Bravo. The title comes from a photograph, printed on the first page, of a topless young woman enjoying the sun. She is standing, head held high in front of a large window with one half-open pane; her sensuous mouth is also half-open.

This photograph from 1988 is very different from the famous Good Reputation Asleep (1939), although they both feature a model with her eyes shut, bathed in the intense rays of the noon sun.


The quality, consistency and unique style of Álvarez Bravo's work earned him great prestige both at home and internationally, whereas most other modernist photographers were forgotten.

The exhibition “Shadow and Light” attempts to construct a visual discourse that will make possible an exploration of what our photographic avantgarde really was; it also aims to bring two brilliant photographers who were contemporaries of Álvarez Bravo out of the shadows.

The choice of these three artists can be explained by several points of convergence and shared influences, particularly in the early stages of their careers and in the formative years of their personal styles, in the late twenties and thirties. For example, all three worked for the Public Education Ministry (SEP) and published their photographs in the same magazines and journals such as Mexican Folkways, Revista de Revistas, Nuestro México, Todo, El Universal Ilustrado and Excélsior.

The exhibition presented at the Instituto Cultural de México in Paris aims to establish a visual dialogue between the images created by these artists, underlining their unique characteristics, their common themes, and their strong desire to construct imaginary worlds that anchor them deeply in post-revolutionary Mexican culture.