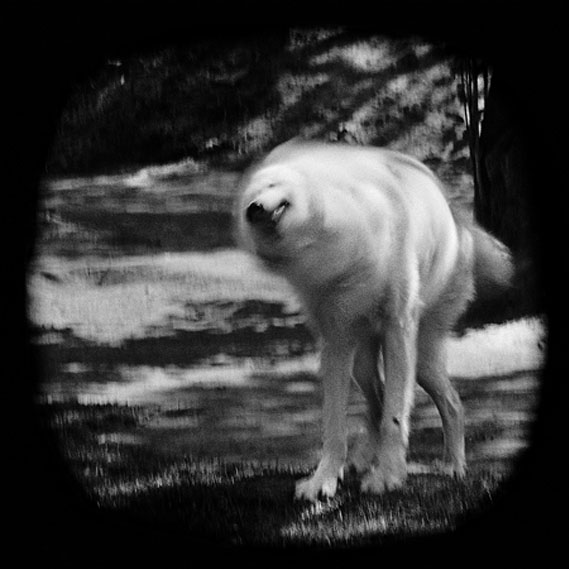 Seen together, Pia Elizondo’s portraits of animals from the zoo in Mexico City’s Parque Chapultepec suggest the narrative coherence of a mythological bestiary composed in a lost language. They also possess the intimacy, the loneliness, even the somewhat tender self-absorption, of self-portraits, of confidences whispered to us through images of captive animals. But they also have a very pure and alert and searching outward gaze: they want to render animals as animals too, and sometimes we can connect with these photographs in a way that recalls those electrifying moments when you find yourself locking stares with an animal, even when it is just with a pet, a dog or a cat – is he about to bite me? Is he trying to tell me something? – until you or the animal looks away, and the moment is gone. Pia Elizondo shows us animals as alien biological matter too, as surfaces, weight, natural processes – psychedelic patterns, the dense slab of a rhino, mottled feathers, a urine-gushing mountain of wrinkled meat, the Francis Bacon-like frenzy of a canine shaking off water, the snout of a dozing panther lifted to the sun, so intimately spied upon it’s as if we can feel the supple languor of the animal’s relaxed powerful muscles, and smell heated carnivore’s breath and sun-warmed pelt.

But sometimes we also think, those wolves look like sleek assassin femme fatales, hmm, I’ve seen them somewhere before. And that tattered old bird of prey alone in his corner, where’s his cigar? Is that polar bear practicing to be a rug?

There’s a routine paradox in the manner that humans look at animals that Pia Elizondo’s photographs get to the heart of: we want them to be Wild Animals, even they are in captivity, the more unlike us the more fascinating; but we also ceaselessly look for, and find, ourselves in them.

What’s it like to be a giraffe in the Parque Chapultepec zoo, peering with burning eyes through that famously contaminated air at the city on the horizon? Is it at all like being Pia Elizondo? If we think of her as a photographer who creates a poetic, personal visual language, one can’t help but contrast Pia with Frida, who explored her own emotional states -- isolation, suffering, sadness, love, and “captivity” -- in paintings that often used animals as anthropomorphic or allegorical conveyors of messages. Dogs presaged death: monkeys were ridiculed acolytes; Frida was a hunted arrow-riddled deer, and so on. Pia’s animals, however captive, are never burdened with such explicit meanings. We recognize that her polar bear is sad, and sad in a languishing way that looks all too familiar --- “I feel so sad I can’t get off the floor,” any of us might say, in heartbreak or unrelenting loneliness -- but it is not an anthropomorphic sadness that this photograph depicts, it’s Real polar bear sadness. Why shouldn’t a polar bear’s sadness remind us of our own? The study of animal personality is currently a hot field, and scientists know now that even squids have emotions and individual temperaments. Humans and animals are not nearly so far apart, certainly not genetically, as once believed, yet our distance from animals remains essentially unbridgeable.

There’s a great Julio Cortazar short story , “Axolotl,” about a Parisian man who goes every day to stare at the lonely Mexican axolotls in their aquarium tanks in the Jardin des Plantes zoo, because he is convinced that, “They were not human beings, but I had found in no animal such a profound relation with myself.“ The man and an axolotl switch places in the story, which ends with the axolotl who used to be a man wondering why the man no longer comes to the zoo every day to look at the axolotls, and he hopes that the explanation is that the man is off somewhere writing a short story about what it’s like to be an axolotl. What animal, I wonder, was Pia Elizondo before she escaped from the zoo and became a photographer?

Asphalt Jungle is the first solo show of Pia Elizondo in the UK. Born in 1963 in Mexico City, Pia studied philosophy at the National University in Mexico. She first took up photography in 1984. Since then, she has exhibited in numerous solo and group shows across both South and North America and Europe including in the 2007 group exhibition Bêtes & Hommes at La Villette, Paris. Pia's work is held in museum collections in Mexico including the Centro de la Imagen and the Consejo Mexicano de Fotografia and in Paris in the Fonds National d'Art Contemporain. Her work is additionally held in private collections internationally. Pia lives and works in Paris.

Asphalt Jungle is the inaugural exhibition for Flaere Gallery. Based in London and Paris, the Gallery specialises in limited edition 20th century and contemporary photography.