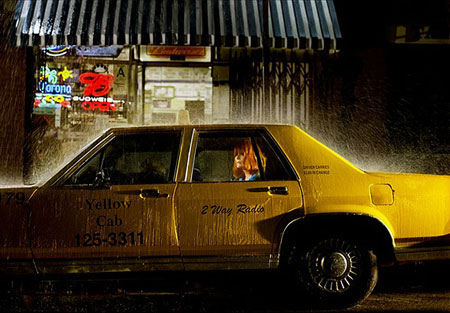 Michael Hoppen Contemporary will present the most recent work by rising American photographer Alex Prager. Following the success of her 2008 critically acclaimed exhibit, The Big Valley, the exhibition will stage the continuation of Prager’s Los Angeles narrative, as she contrives the next generation of retro-modern damsels.

Women adorned with wigs and staged in neon Californian landscapes result in timeless, eerie and compelling images. Her large-format Technicolor photographs draw from the cinematic conventions of the likes of Alfred Hitchcock and David Lynch. These visually engaging portraits go deeper than what meets the eye, creating an intriguing and surreal narrative for the women they feature, which hints at a sense of allure and uncertainty.

Initially inspired by the work of William Eggleston, Prager has consistently created successfully enticing images since her first Los Angeles show in 2007. This latest exhibition in London will feature a selection of never-before-seen photographs and the premiere of Prager’s first foray into film.

Born in 1979, Prager is based in Los Angeles and has no formal training as a photographer. Through talent and tenacity she has been exhibited and published internationally in cities such as Los Angeles, New York and London. Recently Prager has been selected by New York City’s MOMA for their forthcoming autumn exhibition, New Photography 2010. Original, thought-provoking and charged, Prager’s work continues to challenge the preconceived ideas of what makes photography art in a world where so many artists vie for this sought-after label.