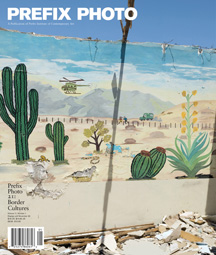 Prefix Institute of Contemporary Art is pleased to announce the release of the twenty-first issue of Prefix Photo magazine. On its theme of ‘Border Cultures,' editor Scott McLeod writes: ‘Over time, ongoing exchanges and interactions between nations, peoples and economies create distinct border zones, such as those of the United States and Mexico, Algeria and France, the cities of Windsor/Detroit, and military and civilian zones throughout the world, among others. The artists represented in this issue draw on their personal histories and experiences with these border regions in order to create compelling, provocative works.' This issue features contributors engaging with a host of contemporary photo, media and installation artists, as follows:

‘Hans Ulrich Obrist in Conversation with Zineb Sedira.' In a recent interview with the erudite critic and curator, Algerian-French artist Zineb Sedira reflects on the place of history and politics in her life and work.

‘The 11th International Istanbul Biennial: What Keeps Mankind Alive?' In texts that evoke the conceptual underpinnings of the biennial, the visceral experience of the city and its historical and political context at the crossroads of East and West, essayists Kathleen Ritter, Jamelie Hassan and Josée Drouin-Brisebois navigate the joys and struggles of What Keeps Mankind Alive.

Lee Rodney's text ‘Border Rituals' discusses David Taylor's work as it sheds light on the economic conditions that have served to change migrant routes into the United States, as well as on political pressures to militarize the border and severely restrict human movement between the United States and its southern neighbours.

Rabih Mroué, in his literary feature ‘A line of poetry,' describes how the photograph of a banner stating "The Fa'our Clothing Store has moved to the Roueiss area, next to Mahfouz Stores" amid the aftermath of Israel's war on Lebanon, surpasses the language of war.

Prefix Photo is published by Prefix Institute of Contemporary Art, a registered charitable organization that fosters the appreciation and understanding of contemporary photography, media and digital arts. Prefix Photo is available by subscription and in fine bookstores and newsstands in Canada, the United States, the United Kingdom, Portugal, Spain, Greece, Turkey, Singapore and China.