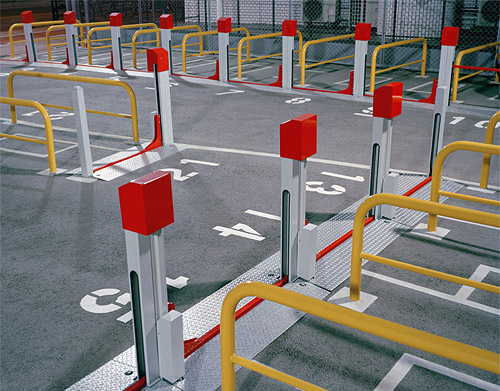 The German-born photographer made his United States debut in Chisel curated by Kathy Ryan of the New York Times at the first annual New York Photo Festival in 2008. His first gallery show in New York followed in the fall of that year at Hasted Hunt Kraeutler. Since then, Faulhaber has been named a new and emerging photographer to watch in 2009 by Photo District News (PDN) and has been included in the exhibition Reality Check: Truth and Illusion in Contemporary Photography at the Metropolitan Museum of Art.

The photographs in Faulhaber's body of work, Lowdensitypolyethylene, are created in newly constructed spaces in the time between when they are completed and when they become occupied or in use. The intense colors and sheen result from exposure times of 10 to 20 seconds, the perspective selected and the artificial light at the location, rather than from post-production. The resulting image often appears abstract, even unreal, but it is in fact a straight document of the space, reflected in such direct titles as &quot;Supermarket" and &quot;Garage".

Faulhaber's work comments on the discrepancy between the material reality of construction, the daily experience of a space, and the utopian ideals that inspire the avant-garde of the architectural field. The actual formal points of an architect's utopian vision are often inspired by the other arts: painting, writing and photography. His work is also embedded in a tradition of German photography that considers the investigation of architectural forms to be important social commentary, a history that spans the work of Albert Renger-Patsch, Bernd and Hilla Becher, Andreas Gursky and Thomas Demand. Faulhaber's work is included in the permanent collections of such esteemed institutions as the Metropolitan Museum of Art, the Harvard Art Museum, and the Princeton Art Museum.