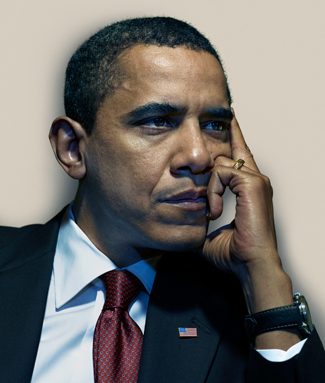 The series »Obama's People«, developed in 2008, focuses solely on the administration - members of the cabinet and closest staff members - of the current President of the United States of America, Barack Obama. The outstanding 53 portraits depict, among others, U.S. Secretary of State, Hillary Clinton and Barack Obama's Chief of Staff, Rahm Emanuel. This series of photographs, commissioned by Kathy Ryan, Director of Photography, and Gerald Merzorati, editor of the New York Times, was published in the magazine's special edition of January 18, 2009. The color photographs depict the regency in Washington, D.C., with subtle dynamics in the form of half-length portraits. The pictures are characterized by an accuracy with which Kander submits the politicians to a unique perspective.
Complimenting Kander's »Obama's People«, CAMERA WORK will present Richard Avedon's Series »The Family« - published in the magazine The Rolling Stone in 1976 - from its own collection. Richard Avedon was one of the most influential and significant fashion and portrait photographers of the 20th century. During his long-term occupation as photographer for The New Yorker, Avedon developed his own puristic, reduced pictorial language in his portraits. In addition, he worked for Harper's Bazaar as well as Vogue und received numerous awards, not the least of which the Highest Achievement Medal.

The internationally renowned photo series of Richard Avedon and Nadav Kander will be presented together for the very first time, and they unveil the media-based transportation of politics as well as the reciprocal effect between political staging and specifically directed image cultivation.

In Person - Nadav Kander
The photographer Nadav Kander, born in Israel in 1961, has worked for a variety of magazines such as The Sunday Times Magazine, Rolling Stone, Another Man, Dazed & Confused, The New York Times. His works have already been exhibited in the VICTORIA AND ALBERT MUSEUM, the NATIONAL PORTRAIT GALLERY, the ROYAL PHOTOGRAPHIC SOCIETY, the SHANGHAI ART MUSEUM, and the PALAIS DE TOKYO.