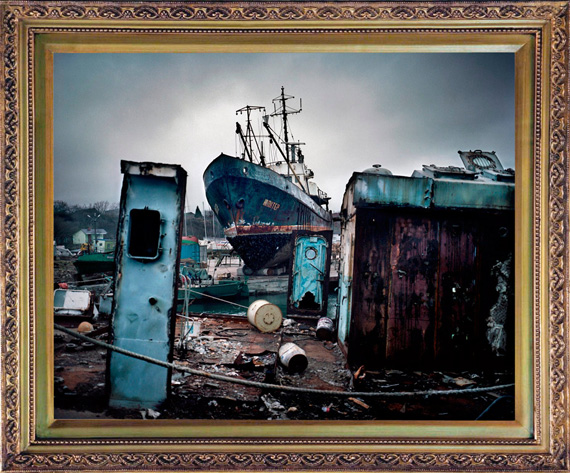 Rafal has been travelling to Ukrainian costal towns and places, meeting with local people. He has documented the change in lives of these people, strongly influenced by long lasting USSR history and recent political events, and their specific relation and coexistence with the sea. Telling a Ukrainian story by connecting seascapes, portraits of locals dressed in their working uniforms and images of everyday life, Rafal created a powerful portrait of the Black Sea. The portrait of the Black Sea is dominated by massive concrete which appears as a relict of the past Soviet times that still directs and marks people's lives.

The first thing you notice by the sea is the concrete. Kilometers of grey blocks sometimes painted with blue and yellow, the national colors of Ukraine. You can feel the Soviet past at once. It looks surreal and it doesn't match the beautiful landscape that surrounds you. Industrial zones and the iron waste by the sea don't remind harmonic idyll between nature and man. People have changed the landscape in a very brutal way here. But the sea fights back for its natural shape and territory. Local people seem to respect the power of the sea. I went to the Ukrainian Black Sea coast to explore this mutual influence and relation between the man and sea. Ukraine is the country in transition and for the last few years has been looking for its new identity. In my opinion so has the Black Sea coast.