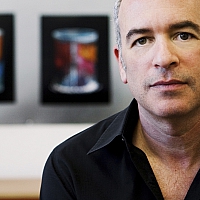 In its first solo exhibition in New York City, David Maisel’s Library of Dust will be on view at Von Lintel Gallery (520 West 23rd Street) from January 21 through February 27, 2010. The photographs in this acclaimed series depict strangely beautiful copper canisters, each containing the cremated remains of an individual patient from an Oregon psychiatric hospital. The canisters are blooming with colorful secondary minerals as the copper has oxidized and undergone physical and chemical transformations. Each pattern of corrosion is unique, some resembling otherworldly landscapes that recall Maisel's renowned aerial photography. Sublimely beautiful yet haunting, these enigmatic photographs can be seen as meditations on issues of matter and spirit.

In Library of Dust, Maisel investigates a zone bordered by ethics and aesthetics. The existence of some 3500 canisters of cremains was revealed by the Oregon State Hospital in Salem in 2005. Within the canisters were the remains of the patients who died at the hospital between 1883 – the year the facility opened, when it was called the Oregon State Insane Asylum – and the 1970s. Although the existence of the unclaimed canisters was not divulged for more than a century, they have continued to have a life of their own. Library of Dust offers a kind of resurrection of these individuals by giving them visual form once again. The hospital (also the site of the film One Flew Over the Cuckoo’s Nest) is now being rebuilt with funds that were allocated after the Library of Dust project brought the existence of the canisters to a wider audience.