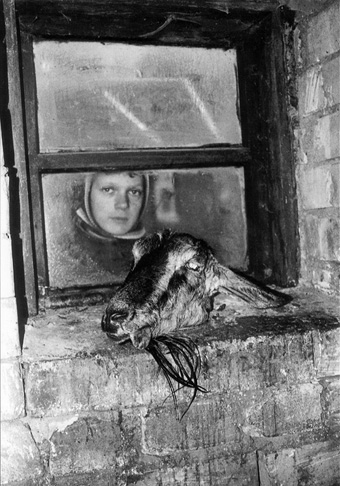 Viksraitis has been quietly pursuing his photography for years, cycling around the desolate farms in the Lithuanian countryside with his camera tied to his bike. Being compared with the British photographer Richard Billingham, he grew up "between marshes and clay" in one of the most secluded corners of the Lithuanian Sakiai district. "You couldn't get out to the world without a large pair of wellingtons."

In this way of life that is fast disappearing, any apparent dysfunctionality, propelled by liberal drinking of home brew appears to be an asset. Viksraitis describes his subjects as " Bearing their cross and yet not grumbling over their lot." Behind the backdrop of hilarity is the disintegration of a way of living, and persistence for survival. The resulting images are slightly insane and wonderfully surreal.
Rimaldas Viksraitis graduated in Photography from the Vilnius Technical School. He worked for ten years as a photographer in Sakiai. He has been a member of the Union of the Lithuanian Art Photographers since 1985. Nominations: 2000/2002 and 2003/2004 a State Stipend from the Lithuanian Ministry of Culture. 2009 Arles Discovery Award, Arles Photofestival, France. Major photographic series include Slaughter (1982-86), Nude in a Desolate Farm (1991), A Meadow at 11.00 (1995), This Crazy World (1995-), Grimaces of the Weary Village (1998-), Farmstead Children (2000-), Farmstead Dreams (2000-).
He is represented by Anya Stonelake/White Space Gallery in London

Photographs selected by Martin Parr
Supported by the Ministry of Culture of the Republic of Lithuania
Catalogues are available.