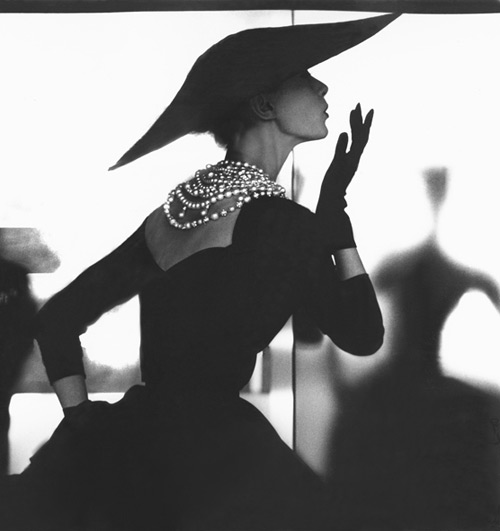 "No one else in the history of photography has captured this breathtaking moment between the appearance and disappearance of things, like Lillian Bassman"
Richard Avedon

Photographically speaking we are probably as close as you could come to opposites I'm completely tied up with softness, fragility, and the personal problems of a feminine world. Paul's work is virile, it's more direct and he deals with the world as it actually is"
Lillian Bassman, 1951

Gallery f5.6 is honored to present photographs by Lillian Bassman and Paul Himmel - one of the legendary artists couples spanning the 20th Century for the third time since 2003. This exhibition is dedicated to Paul Himmel who died this year in February. We will show well-known images as well as recently discovered works by Lillian Bassman (*1917) and Paul Himmel (1914-2009). Who were married more than 78 years. The exhibition runs parallel to the first ever retrospective held at Haus der Photographie, Deichtorhallen Hamburg.


The different stations of their respective careers as well as their intersection points were numerous and multifaceted. They met on the beach of Coney Island when they were still children and marry when Paul Himmel turns 18. In the beginning Himmel trains as a professional dancer and learns how to take pictures on his own, whilst teaching. In the late 60's he turns completely to psychotherapy becoming a well known figure in New York in this field. Bassman's route runs slightly more directly to the world of creative fashion. Before becoming one of the leading fashion photographers of the 20th Century, she is an artist's model, textile designer, fashion illustrator and the editor of Harpers Bazaar Junior and Harpers Bazaar, starting many young careers such as Richard Avedons and also Paul Himmels. Behind the creative side of Harper's Bazaar at this time was the well-known Alexey Brodovitch. Enthusiastic about Bassman' s fashion illustrations he offers her her first job at Harper's Bazaar Junior before taking her onboard at Harper' Bazaar. In this position Bassman also gives jobs to Paul Himmel. Quickly, Himmel is also working for Vogue Magazine as well as Harpers. Although Bassman's and Himmel's work met the directives of fashion photography both clearly were more interested from the very beginning in pursuing a far more radical and experimental way of working way beyond the norms of their time. "Out of my protégés Paul is the one who most genially transforms movement" Alexey Brodovitch once said about Paul Himmel's dance photographs. Coming from dance himself, Paul Himmel starts working with under, over and in particular with long term exposures. The result is one of the high points in Himmel's career with the publication of "Ballet in Action" in 1954. Himmels documentary images are also included in Steichen's well-known exhibition "The Family of Man" at the Moma, New York. Working on topics such as the circus and experimenting with color and abstracting the nude into almost Giacometti-like figures, Himmel distances himself more and more from commercial work and finally gives up photography completely.


Lillian Bassman's work is important next to Richard Avedons, Irving Penn's and Horst P Horst's work as being instrumental in making fashion photography an artistic genre in its own right. As one of the few women in this field she gave space to make fashion a seductive and glamorous event in itself. She created a sophisticated and elegant style in luminous white and dramatic black hues, transporting the atmosphere of early Hollywood cinema into her images always working in an experimental and radical way. Lillian Bassman shot through gauze, worked with mirrors and smoke and started working directly on the prints. The end-result made the photographic image more seemingly unreal, moving it closer to the painted image. From the 70's onwards Bassman retreated from working commercially more and more, pursuing her own projects.

As professional photographers Bassman and Himmel went through the high points of a commercial career and the low-points of economic recession but always continued to grow in their own artistic development. This lead to the continuous re-discovery of their work validating their own longstanding belief in the possibility of a different visual language which remains unparalleled up until today.