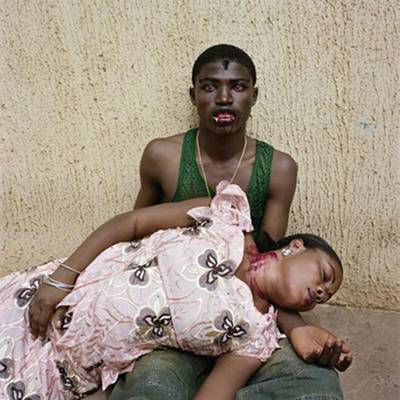 A South African of Afrikaner origin, Pieter Hugo is one of the most representative photographers of his generation. With great capacity of penetration, his works explore the most striking contradictions of African societies, together with certain peripheral aspects which are nonetheless dense in meaning. For the production of his Nollywood series, with its large size pictures, the artist frequented in 2008 and 2009 the sets of the Nigerian film industry. With an eye that is at once detached from but in dialogue with the subjects of his portraits – with whom he always builds up relationships of mutual awareness – Hugo is fascinated by the borderline situations he identifies on his trips throughout Africa.


Nollywood is said to be the third largest film industry in the world, releasing onto the home video market approximately 1 000 movies each year. Such abundance is possible since films are realized in conditions that would make most of the western independent directors cringe. Movies are produced and marketed in the space of a week: low cost equipment, very basic scripts, actors cast the day of the shooting, 'real life' locations. Despite the improvised production process, they continue to fascinate audiences.

In Africa, Nollywood movies are a rare instance of self-representation in the mass media. The continent has a rich tradition of story-telling that has been expressed abundantly through oral and written fiction, but has never been conveyed through the mass media before. Movies tell stories that appeal to and reflect the lives of its public: stars are local actors; plots confront the viewer with familiar situations of romance, comedy, witchcraft, bribery, prostitution. The narrative is overdramatic, deprived of happy endings, tragic. The aesthetic is loud, violent, excessive; nothing is said, everything is shouted.

In his travels through West Africa, Hugo has been intrigued by this distinct style in constructing a fictional world where everyday and unreal elements intertwine. By asking a team of actors and assistants to recreate Nollywood myths and symbols as if they were on movie sets, Hugo initiated the creation of a verisimilar reality. His vision of the film industry's interpretation of the world results in a gallery of hallucinatory and unsettling images.

The tableaux of the series depict situations clearly surreal but that could be real on a set; furthermore, they are rooted in the local symbolic imaginary. The boundaries between documentary and fiction become very fluid, and we are left wondering whether our perceptions of the real world are indeed real.

The exhibition is accompanied by the monograph Nollywood published by Prestel (essays by Chris Abani, Zina Saro-Wiwa and Stacy Hardy). Other monographic publications of Pieter Hugo's work: The Hyena & Other Men, Prestel 2007, Messina|Musina, Punctum 2007, Looking Aside, Punctum 2006.