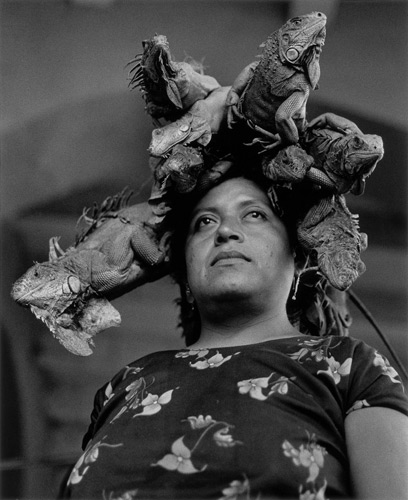 The photograph Mujer ángel (Angel Woman), showing a Seri Indian with her back to us, walking through the desert carrying a radio recorder, is one of Graciela Iturbide's most compelling images. It is, strictly speaking, a documentary photograph, and yet, at the same time, it appears to symbolise the tension between two civilisations, raising the question of how indigenous culture can continue to survive within western culture. Graciela Iturbide often creates images that seem to shift like silhouettes between knowing and sensing. Her photography addresses the subtle and complex interaction of different realities and their stratifications. She herself describes photography as an excuse to discover the world. It is an approach that makes "discovering" seem synonymous with "living"; as though "being in the world" were quite simply the same as "being".

Graciela Iturbide (*1942) is Mexico's foremost contemporary photographer. She has won many accolades, among them the prestigious Hasselblad Award (2008). In the course of a career spanning some 40 years, she has charted a path towards a better understanding of the development of photography in Mexico and throughout Latin America.

When Graciela Iturbide enroled to study cinematography at the National University of Mexico in the late 1960s, she also attended lectures by the famous photographer Manuel Àlvarez Bravo, who inspired her to pursue photography. She soon became his assistant. It was through her close friendship with Àlvarez Bravo that Graciela Iturbide immersed herself in the Mexican art scene of the time and became familiar with the work of such artists as Tina Modotti, Edward Weston, Henri Cartier-Bresson, Frida Kahlo, Diego Rivera and many more besides.

Between 1979 and 1986, Graciela Iturbide undertook her first major photographic project. She repeatedly traveled to the myth-shrouded Zapotec heartland of Juchitán in the southern state of Oaxaca, where she lived within the community, learning from the local women about the deeply rooted traditions and rituals that inform so many of her unforgettable images. In the portraits and landscapes of Juchitán de las Mujeres (Juchitán, A Town of Women), Graciela Iturbide brings to life the rich and many-facetted world of the indigenous people.

Finally, it was Graciela Iturbide who, in 2006, became the first person to be allowed to enter the bathroom of Frida Kahlo, which Diego Rivera had closed up after the death of his wife in 1954. In her series of photographs showing this very private sanctuary, left entirely unchanged for so many years, Iturbide enters into a dialogue with the everyday objects and the creative oeuvre of the artist. She does so in a way that is both respectful towards this icon of Mexican culture, yet at the same time subjective in its interpretation.