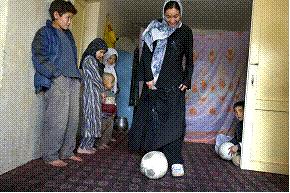 Karijn Kakebeeke was named winner of the 2009 BMW - Paris Photo Prize for contemporary photography at the opening of Paris Photo, receiving the 12 000 Euros (US $ 15, 000) Prize.

Karijn Kakabeeke, represented by The Empty Quarter Gallery from Dubai, is the sixth winner of this major international award. Born in 1974, the Dutch photographer is pursuing her continuing interest in social issues through her photojournalistic, essayistic images. In this context, she captures pictures that stand as magnificent icons of our time. The winning work “Khadija’s Dream” records an early moment in 2006 when Khadija first played with a football: an emotionally charged image of an Afghan woman who now belongs to the first female team in her country.

Jury member Matthias Harder, curator at the Helmut Newton Foundation in Berlin had this to say: “This image by Karijn Kakebeeke offers a glimmer of hope for a future in which it has become possible, in a country like Afghanistan, to establish a female football league, and where women are starting to gain a few more basic rights. The prize-winning image shows a glimpse of happiness. Kakerbeeke’s genre scene convinced the jury owing to the controversial nature of the topic chosen and its relevance to the given theme.”

Japanese photographer Tatsumi Orimoto represented by DNA Gallery (Berlin) was awarded a special jury distinction for his moving self-portrait taken with his mother who suffers from Alzheimer’s. This image is part of his extensive “Mama Series” (2008).

The BMW - Paris Photo prize is designed to support contemporary creativity and is awarded once a year to an artist/photographer for his or her work on a theme related to BMW France’s advertising campaign. For its sixth edition, the prize, reserved for artists represented by galleries participating in Paris Photo, will reveal the best in contemporary photography with work on the theme “When was the last time you experienced something different for the first time?”

Twenty of the 55 artists whose work was submitted by participating galleries were short-listed by a jury of international experts presided by Philippe Dehennin, Chairman of BMW France. The jury then worked to select the winning artist. The short-listed works are exhibited during Paris Photo.