Joel Sternfled - On this site 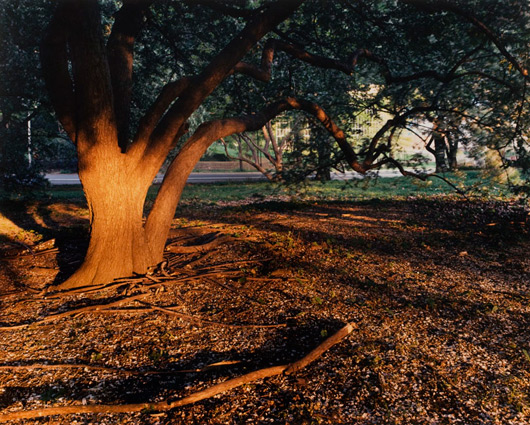 Buchmann Galerie Berlin is pleased to announce the second solo exhibition by Joel Sternfeld (b. 1944), the pioneer of the American New Color Photography.

The exhibition shows selected works of the series On This Site, which played an essential role for Joel Sternfeld's oeuvre and its perception. The color photographs were taken in the U.S.A. between 1993 and 1996 and are shown in this focused form for the first time in Germany.

In this sobering collection, Joel Sternfeld looks at places where violence has stained the American Landscape. Arriving long after news photographers have gone, he presents us with the landscape that is left behind, the ordinary site that remains after the tragedy. Free of the sensationalism of contemporary reporting, these unadorned images, and the brief text that accompanies them, have a surprising power, allowing us to contemplate the meaning of what has taken place, and what has been lost.1

Joel Sternfeld: "I went to Central Park to find the place behind the Metropolitan Museum of Art where Jennifer Levin had been killed. It was bewildering to find a scene so beautiful... to see the same sunlight pour down indifferently on the earth.

As I showed the photograph of this site to friends, I realized that I was not alone in thinking of her when walking by the Met. It occurred to me that I held something within: a list of places that I cannot forget because of the tragedies that identify them, and I began to wonder if each of us has such a list. I set out to photograph sites that were marked during my lifetime.

Yet, there was something else that drew me to this work. I think of it as the question of knowability. Experience has taught me again and again that you can never know what lies beneath a surface or behind a façade. Our sense of place, our understanding of photographs of the landscape is inevitably limited and fraught with misreading."

His works were shown amongst others in the Art Institute of Chicago, the San Francisco Museum of Modern Art, the Museum of Modern Art, New York, the Tate Modern, London, the S.M.A.K. Gent and the Fotomuseum Wintherthur. There are several books published by Steidl. An institutional retrospective exhibition is in preparation stage.