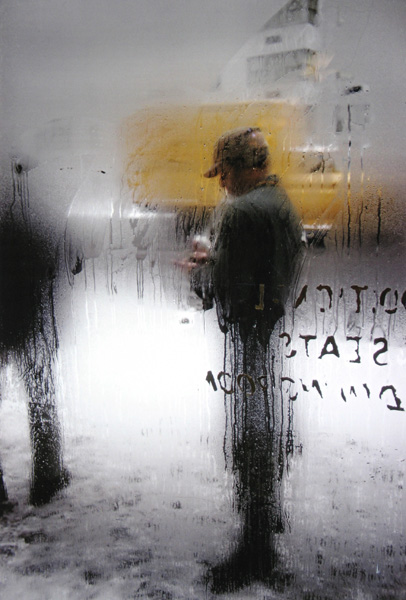 The lyricism and intensity of his vision come into fullest play in his eloquent handling of color unequaled by his contemporaries. Leiter's visual language of fragmentation, ambiguity, and contingency is evoked by these subtle, painterly images that stretched the boundaries of photography in the second half of the 20th century." .
Martin Harrison
Gallery f5.6, Munich in association with the Howard Greenberg Gallery, New York is pleased to anounce the first presentation of works by renowned 86 year-old Saul Leiter (born 1923, Pittsburgh, Pennsylvania) in Germany Saul Leiter is one of the true pioneers of colour and abstract photography. He started shooting in colour in 1948. It is still considered now that William Eggelston’s legendary colour show at the MOMA in 1979 was groundbreaking for the acceptance of colour photography. Saul Leiter showed his first photographs, then in black and white at the Moma in 1953. First color images were included in a show at the MOMA in 1957 purely as a slide projection under the heading „Experimental Photography in Color“. Before Pop Art became a widely accepted way of art practice, colour photography inhabited the realm of magazine and advertising and was seen as low art, vulgar or kitsch (Clement Greenberg.
As one of the very few photographers almost up until now, Saul Leiter treated the use of color in his photographs of the street and his surroundings as a painter of his time would have done. Indeed, Saul Leiter came to New York in the early 40’s to be a painter. In the beginning he exhibited with the Abstract Expressionists like Willem de Kooning and Phillip Guston. Through a meeting with the artist Richard Pousette-Dart and his photographic experiments and Henri Cartier Bresson’s groundbreaking exhibition at the MOMA in 1947, Saul Leiter became motivated to start working with the camera. Next to painting, Saul Leiter started shooting in black and white. Soon though he became more interested in colour, something his contemporaries categorically rejected. Like Robert Frank, William Klein or Helen Levitt, Saul Leiter found his images in his immediate surroundings on the street.
In contrast to the other photographers of his time, Leiter was interested in transposing the formal pictorial language of Abstract Expressionism to the photograph and its inherent qualities such as the supposed document of reality. Rather, it seems that his images have a timeless quality like that of a painting. Saul Leiter understands his way of seeing with the camera rooted in the work of European painting of the late 19th and early 20th Century.
The references he cites are Pierre Bonnard und Edouard Vuillard. Like them Leiter makes use of subtle, often mono or pan-chromatic colour fields, lines and form in direct relation to the human condition in the outside world. Through seeing the world like an abstract expressionist painter does, Saul Leiter concurrenly laid the foundations for the development of the abstract notions of a photograph. Thus, Saul Leiter’s highly innovative approach pushes the boundaries of the medium of photography even up until today. It is only recently that younger artists have been approaching the nature of photography in the way that he has.
His work is in the collections of the Museum of Fine Arts, Houston; the Art Institute of Chicago; the Baltimore Museum of Art; the Victoria and Albert Museum; the National Gallery of Australia; the Whitney Museum of American Art; the Milwaukee Art Museum; the Yale University Art Gallery; and other prestigious public and private collections. His work was shown at the Milwaukee Art Museum and in a comprehensive retrospective at the Fondation Henri Cartier Bresson in Paris recently.