If You Lived Here Still... A project by Martha Rosler 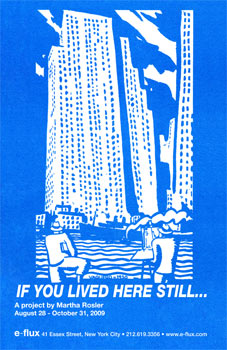 "If You Lived Here... " was, in Yvonne Rainer's words, "a vivid demonstration of how an art exhibition can constitute a radically different approach, one that can offer not only a diversity of objects but can contextualize a social field in and from which the objects are produced and derive their meaning. In other words, art exhibition does not have to separate, or isolate, its objects from the conditions in and under which those objects have been produced."

Part research-based artwork, part curated group show (with three discrete exhibitions, four public meetings, and numerous auxiliary events), part discursive series on and around the subject of homelessness and housing in America, "If You Lived Here..." took place at a Dia Art Foundation building in Soho, in New York City, in 1989. In structuring her project, Rosler worked with the young artist and student of urbanism Dan Wiley as well as with a self-organized group of homeless people calling itself Homeward Bound, and with such groups as the MadHousers, a Southern architecture collective building "huts for the homeless." She also worked with numerous advocacy and activist groups in the city, as well as with architects and urbanists.

Reception of the project, by both Dia itself and the art and local press, showed a difficulty in recognizing the project as an exhibition of art rather than, say, a pure form of social activism. But in the end, "If You Lived Here... " was recognized as presaging much of the interest in documentary and research-based practices, "relational" and discursive structures, participatory projects, and the "new institutionalism" that became prominent artistic and curatorial methodologies in the following two decades. According to the German art historian Nina Möntmann, "If You Lived Here... " was a key work that influenced a whole generation of artists such as Rirkrit Tiravanija, Renée Green, Fred Wilson, and numerous others.

As homelessness rises to record levels in New York City and elsewhere (whether because of the current grave economic conditions or the continuing absence of sensible housing policy), we find it a particularly important time to present the documents of "If You Lived Here... " for public viewing and research. The archive includes several hundred documents. Among them are notes and plans, correspondence between Rosler and numerous individuals and groups, exhibition checklists, posters, announcements, and press releases, photographs and videotapes, research into the Dia Foundation's real estate holdings, volumes of magazine articles and newspaper clippings on homelessness as well as lavish real estate ads, archival material on the urban development, galleys and manuscripts of the book that resulted from the project, as well as many items that informed the project but may not have been exhibited in the original exhibition cycle.

"If You Lived Here Still…" will open with a reception for the artist on Friday, August 28th, at 6 pm and will remain on view through Saturday, October 31st, 2009.