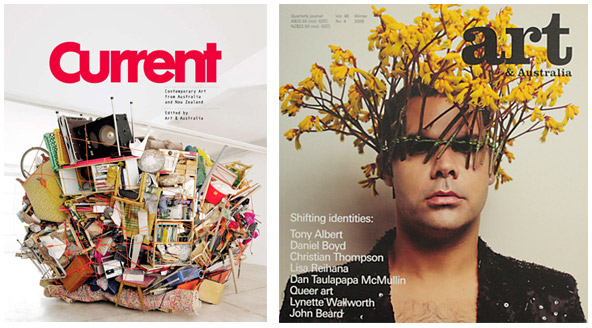 In its 46th year of publication, the art magazine of record, Art & Australia, is pleased to continue its presence at the Venice Biennale.

Eighty artists have been carefully chosen to reflect the vibrancy of art today, with names familiar to followers of contemporary art – Tracey Moffatt, Shaun Gladwell, Claire Healy and Sean Cordeiro, Patricia Piccinini, Ron Mueck and Del Kathryn Barton – along with some of the region's freshest talents, such as Benjamin Armstrong, Rohan Wealleans and Francis Upritchard.

Current and the latest issue of Art & Australia are available the Biennale bookshops in the Giardini and Arsenale and at the newly opened Punta della Dogana.

As Bernard Smith so sagely noted fifty years ago in his Antipodean manifesto - reprinted in this Winter 2009 issue - in each game of identity it is the artist who plays the 'creative and liberating' role. As our feature artists personally attest, identity is not an idea to be defined and defended at all costs. Instead, as Nikos Papastergiadis patiently observes in his opening piece, cultural identity can open up more poetic possibilities of 'seeing the world'. Each artist in this issue throws light on the next. The bold refusal of young Australian Indigenous artists Tony Albert, Daniel Boyd and Christian Thompson to be seen as colonised subjects in turn informs the shifting identity of Lisa Reihana's multimedia Maori practice. Dan Taulapapa McMullin's paintings speak strongly of the Pacific diaspora and his parallel journey as a Samoan fa'afafine, or biological male raised to assume a female role, in turn segues to the sexual questioning at the heart of Australian queer art's inversion of otherness. Pushing boundaries is at the core of Lynette Wallworth's immersive interactive practice - a blurring of the public and private which, in this issue, finds painterly form in the work of John Beard, whose solitary heads and headlands speak eloquently of a 'seeing into the communal self'. Beard's revealing darkness finally leads us to the mysterious night-time unearthings of Matt Coyle's new drawing series 'The Shades', a special Art & Australia commission to be published over four issues.

Essays:
The six essays address key aspects of contemporary practice. The essays are: