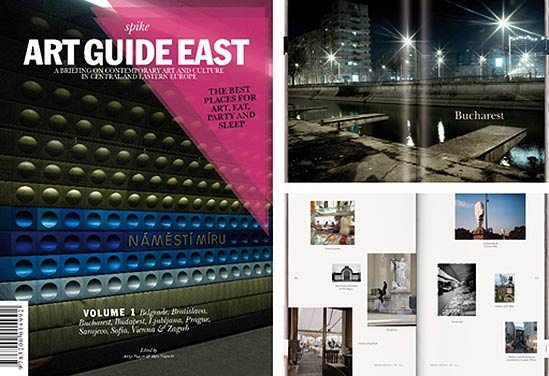 On the occasion of the 20th anniversary of the fall of the Iron Curtain spike art quarterly presents a new publication.

spike ART GUIDE EAST
A Briefing on Contemporary Art and Culture in Central and Eastern Europe
What makes up a city's art scene? The places where art takes place, the cafés and restaurants where people meet, the bars and clubs. The spike Art Guide East examines the art scenes, past and present, of ten Central and Eastern European cities: Belgrade, Bratislava, Bucharest, Budapest, Ljubljana, Prague, Sarajevo, Sofia, Vienna and Zagreb. Included are interviews, articles and recommendations from artists, curators, critics, gallery owners, collectors and creatives on-site.

"The great thing about artists in Zagreb is that they are usually very open, they don't mystify their work and they really do art because they love it. Otherwise they'd be filming commercials for the mobile company billboards that dominate the visual world of everyday Croats"
(Marko Rajkovic, journalist, Zagreb)

"In comparison to the relatively small size of the city, the range of cultural facilities offered is enormous. Every day quite a number of good (!) cultural events take place, an off-space opens, or a museum or a gallery has an opening. Traditionally the amount of music performed is amazing and a lot of things happen at the interface between music, fashion, performing and visual art."  (Anna Jermolaewa, artist, Vienna)

"The Tito Museum is one of the few personal museums in existence, and it can be very bizarre, this especially applies to the collection of gifts that Tito received in his lifetime. For example, when John Lennon and Yoko Ono got married, they sent a gift to every statesmen in the world: two acorns."  (Mileta Prodanovic, painter, fiction writer and art critic, Belgrade)

"Even though the international financial crisis has barely hit the Hungarians yet, passionate collectors are still buying. Local stars from the 20th century have made records at auction and their prices are, in the meantime, on a parallel with the prices of well-known international artists."
(Katalin Spengler, collector, Budapest)