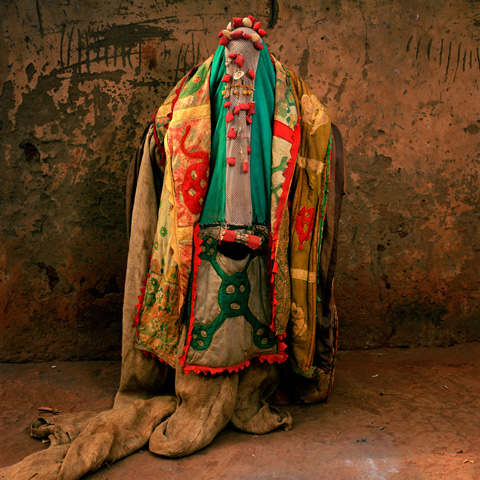 One of characteristics of the Western man is his fascination with primeval cultures. Since the voyagers in the 14th century up till now, five centuries later, the globe has been explored over and over again, by modernists like Picasso and Braque and ethnic fashion studies by Irving Penn, by contemporary mass tourism to exotic places, exposed on World Fairs and in popular maga¬zi¬nes like National Geographic.
In the ‘primitive’ man we admire all those things we have lost - or imagine to have lost - in our much too industrialized society: A life with the nature, simplicity, and a direct link to the super¬natural. You would think that the army of explorers, photographers, cinematographers and an¬thropologists that have visited faraway nations by now would have combed out the exotic world, described, unraveled, mapped and recorded it entirely.
But this is not the case, as we can see in the oeuvre of American photographer Phyllis Galembo. She has an obsessive love for attires and garments which people from different parts of Africa are wearing during religious and profane celebrations and rites. Galembo: “The link between these 2 continents is kept alive by stories of suppression and the Diaspora, and by their rituals, brought to a higher level by art”.
Galembo’s images are disconcerting. The photographer abstains from every form of décor or sty¬lization, thus drawing the spectator’s eye directly towards the ‘living statues’. The natural extra¬vagance of the dresses with their beads, shells, feathers and waste matter, evokes all sorts of in¬voluntary associations with haute couture shows in Paris.
Her work is included in numerous public and private collections including the Metropolitan Mu¬seum of Art, Museum of Fine Arts, Houston, Philadelphia Museum of Art, Library of Congress, Chazen Museum of Art, TANG Museum, New York Public Library, and the Polaroid Corporation.

A year ago Galerie Alex Daniels became acquainted with Galembo’s work, and we are proud to present her first solo show in Europe. At the opening of the exhibition a special limited edition consisting of a handmade box with two original colour photographs will be presented (limited edition of 60).