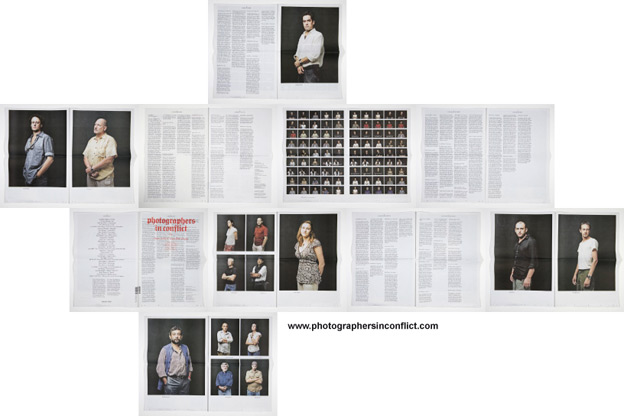 The publication “Photographers in Conflict” reveals those faces to us that are normally behind the camera and, therefore, responsible for our image of the world — concerned photojournalists.
Goran Galić and Gian-Reto Gredig photographed and interviewed 32 professionals during the renowned festival “Visa pour l’Image” that resembles each year the world’s best photojournalists in Perpignan, France. The two young artists portrayed the journalists in the style of historical portraits and asked them keyword questions related to their métier. The answers accompany the pictures in the publication and are ordered by the given keywords: Camera down — My kind of picture — Banging on people’s heads — The man on the street — Publish or perish — Hours in the darkroom. They expose the diverse layers of the job and how every individual copes differently with its horrors, with self-reflection, and manipulation.
By publishing “Photographers in Conflict” as a newspaper a reference is made to the medium in which a lot of the images shot by photojournalists appear. The publication contains 16 portraits and a selection of transcripts of the video interviews, which will be released also online November, the 30th 2008. This is not merely a contemporary solution, but it reflects also the area of tension of today’s photojournalistic industry: on the one hand the classic reportages published in magazines and papers and on the other hand — in order to be able to be competitive with the emerging “citizen journalists” — reportages that more frequently are published online — often interactively and multimedia-based (e.g. with the commentary of the photographer). Galić’s and Gredig’s project reverses for once the asymmetrical power relation between the image producers and the depicted. A very enlightening venture!

Goran Galić (1977) studied photography at the School of Art and Design Zurich. Gian-Reto Gredig (1976) studied Social Anthropology at the University of Zurich. Both live and work in Zurich. “PIC” is their first publication with Kodoji Press.