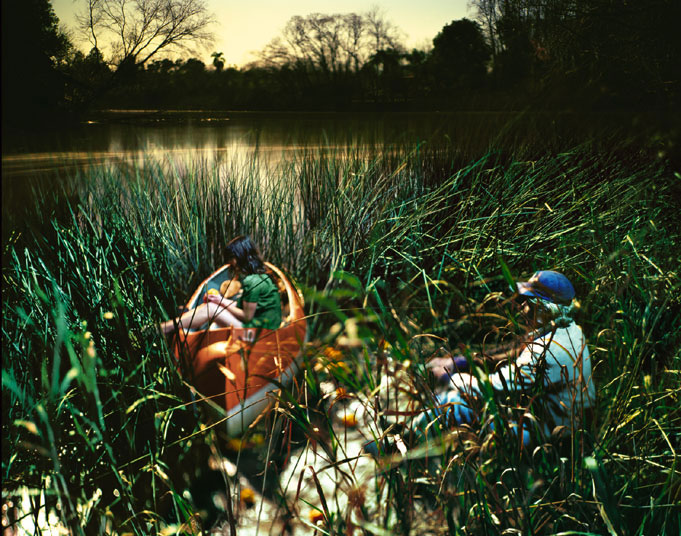 Alejandro Chaskielberg. Their own water. From the series ‘La Creciente. The Islanders of the River Parana Delta’
Festivals du 7/5/2009 au 29/11/2009 Terminé

Talent Latent is the exhibition which forms part of the SCAN photographic festival. Coorganised by the Department of Culture and Communication and Tarragona City Council, the 2009 edition of SCAN consolidates itself as a platform for the participation in and contribution of content and structure in the field of the photographic image, and in the fields of education, investigation, research, diffusion and heritage. SCAN is constantly evolving and its flexibility allows it to embrace both historical memory and new developments in the field.

SCAN 09 has two aspects. One is conceptual, consisting of the Symposium, dedicated to the theory of image, and the Dialogue; and that of a showcase, with the diffusion of the work of artists at the beginning of their respective careers. The International Workshops and the creation of a research grant, on the other hand, strengthen the pedagogical part of the festival.

The photographic project Talent Latent is the showcase of the SCAN festival, and has become one of its pillars. This exhibition aims to become a visible platform for fresh new talent. It also aims to become an important source of information for professionals in the world of photography.

Talent Latent has received the participation of 90 'satellites', a group of professionals spread worldwide who collaborate with SCAN, providing contact with artists in the initial stages of their career. These 'satellites' have this year suggested a total of 223 artists, 14 of whom now form part of the 2009 Talent Latent project. The rest make up a database which will be sent out to all participating satellites, and will be at the disposal of any professionals who may be interested. This tool will permit the achievement of one of Talent Latent's principal objectives: to become a platform aimed at showcasing new talent.

The talent of the artists will remain latent until 7 May, when the exhibition of their work will open the second edition of the SCAN photographic festival.

The show can be seen at Tarragona's Mercat Central (Corsini square, s/n), until 5 July. On 2 October, Talent Latent will open at Arts Santa Mònica de Barcelona (La Rambla, 7), as part of their quarterly programme dedicated to the photographic image. This will mark the beginning of their international journey to different museums and centres around the world.


The story behind the show: artists and projects

Comissioned by Cristina Zelich, the selection of pieces has not only been determined by their formal value, but also by the reflection of their special areas of interest.

Generational reflection, questions of identity and the feeling of belonging to determined social groups are recurring themes, as are the influence of illness, or the theme of work, as determining factors which mark patterns of different behaviours and determine a person‘s existence.

Other themes that we see reflected in these projects consider the urban landscape and its influence on daily life, and the relationship of man with nature, in an era in which the environment and its preservation hold a privileged space in the collective imagination.