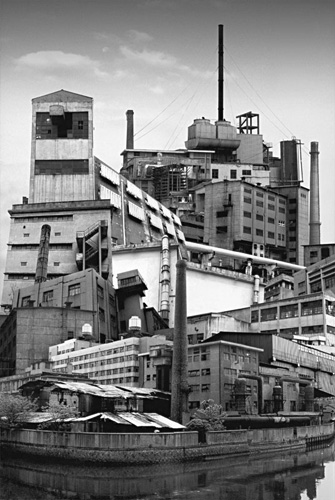 The works in Sun Ji's "Memory City" are architectural collages that speak of urban transformation as destruction and displacement of the old must make way for the new; memories recreated that are both meant to be forgotten and remembered. In his first body of work "Memory City I", Sun Ji uses his camera to create hyperrealist collages of industrial landscapes, factory facades, water towers, smoke stacks and abandoned buildings that result in works of striking scale and formality. Recreating impressions and memories from his childhood, the young Shanghainese artist began in 2005 by carefully assembling single portraits of buildings to create massive black and white compositions that surpass the physical limits of possibility but in the viewer's imagination renders an almost plausible behemoth construction, alive yet forever a part of Shanghai's history. In "Memory City II", the smoke stacks and metal pipes are replaced by low-rise facades and elements of Shanghai's lane life as the young artist's focus shifts to the ubiquitous Shanghai urban landscape phenomenon of partially torn down residential buildings. The resulting compositions become dense, layered mountains of neighborhoods stacked one atop the other as if waiting to be leveled.