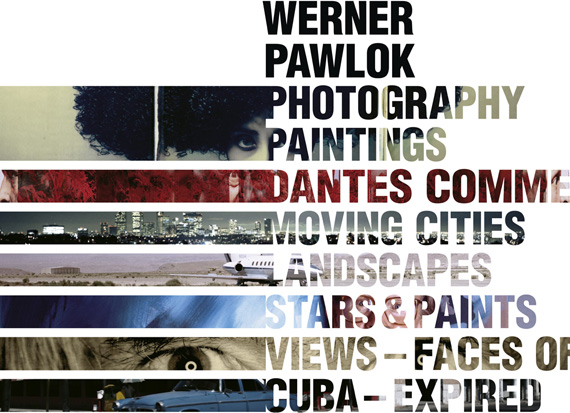 Werner Pawlok - a retrospection ahead

There is a picture by Paul Klee named Angelus Novus. It has gained fame through the interpretation by Walter Benjamin: ... a storm is blowing from Paradise and has got caught in his wings; it is so strong that the angel can no longer close them. This storm drives him irresistibly into the future to which his back is turned, while the pile of debris before him grows toward the sky. What we call progress is this storm, Benjamin writes. Within his esoteric murmur the generations represented by Werner Pawlok have found, recovered their language. The bejaminian metaphor might as well provide an image for the concern of a retrospective: Backward-turned, in order to win the future. Werner Pawlok can look back to artistic producing, uniting to become an opus. He can look back to experiences that brace him for the things to come. He looks ahead. Nobody can telll the future towards which we drift, just like Benjamin's angel of history. But we are able to shed light on our actual position within the medium of art. Art serves as an orientation in a world that, by itself, allows no overview. Artists simultaneously serve us as pathfinders. Werner Pawlok's works tell us about this world that we know but that still seems quite strange sometimes. We learn (and comprehend) that it is possible to take up a position and this is at least the beginning of all orientation.

Independent of physical resemblance, a portrait always aims at personality, it tries to express the core of a human being's nature. Always, the face was considered the mirror of the soul. Face and mimic are the communicative traffic-points of the unspoken and the unspeakable. Even more, the human face is a tale itself. Life writes its lines into a face and, with each engraved experience tells about what the portrayed person was and still is in his or her life. We follow these traces and hope to recognize ourselves within the portrait of the other. This constitutes the inexhaustible atttraction of the portrait.
The Kaufleuten is probably the best known club in Zurich. Readings of contemporary writers from all over the world are a part of its program. There is only little time for Werner Pawlok and his project. It is always the same installation, a ring-flash and the camera with a polaroid film. Always the same light too, which meets different ages, vitas and facial landscapes. Pawlok explains the procedure to Jonathan Franzen: Only two shots, pressing the release twice. One of the portraits is for the author, the other one becomes part of Pawloks contemporary writers series. A distance of only twenty centimeters separates the author and the camera. What does the face reveal of this life? The reactions towards the portraying situation vary: from easygoing to superior and open, but also irritated by this close look that searches for the way inside. "You are not going to look into my soul", Franzen says arranging his glasses like a shield.

Fifty years have passed since, on new years eve of 1959, cuban dictator Fulgencio Batista precipitously flew from havana and the power over the sugar-island fell into Fidel Castro's hands. In the meanwhile, the era of the Máximo Líder came to an end, too, and the pictures in which Werner Pawlok tells about the morbid charm of an old carribbean metropole almost show a part of history themselves. The splendour and misery of the cuban utopia, the projecto cubano, melt together so obviously in these abandoned palaces of the old sugar-aristocracy. Pawlok tracks this sunken world during his rambles through Havana. Nevertheless, what concerns him about it has nothing to do with nostalgy. He doesn't show picturesque ruins but traces the incomparable vitality of the habaneros which has such a fascinating impact on us europeans. At first glance, this seems paradox as his sceneries usually are deserted. But under the surface, in a subtle way, the people who are living here are always present. Then, at a second glance it becomes obvious that, while roaming through Havana, Werner Pawlok has no deserted world in mind. He rather wants to comprehend the inhabitants and their spirit when he uses the release of his camera. He manages to seek out the unbending life that adds dignity to these places. An undertone of cheerful serenity and despair resonates in their silence, familiar and strange at once.

With his photography paintings Werner Pawlok decidedly emphasizes his intention to foil the old-fashioned way of thinking in categories, which separates photography from painting. The camera direction of the shots aims at a gestural and mimic vocabulary which are evocative of the classical portray painting of european art history, but without imitating or even quoting it. It is rather a sort of cultural background-noise which accompanies these works without a concrete reference being intended or comprehensible. For Pawlok, it is a question of the sublime heritage of this painting, which can be tracked until present times. He is familiar with these elements of bodily expression from the world of fashion, to say under the conditions of modern mass-communication. Here, he seeks to recover the intimacy of the origin which got lost on the way to pose. Rich light and colour shades that seem to arise from a baroque colour-palette, the almost tangible sensuality of skin, velvet sheets, fur and heavy drapery- all this can not hide the fact that the image searches for an intimate dialogue with the viewer. This might be the reason why the works seem to defy mere description. Being technically perfect, they signalise a certain vulnerability and fragility owing to the fugacity of the moment when meaningful sensitivity reveals it's language to the viewer.