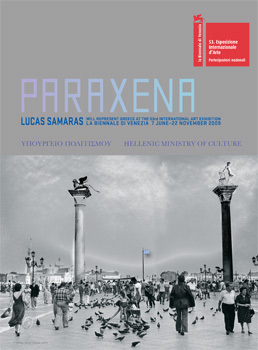 Curated by Matthew Higgs, Lucas Samaras will present the multi-installation "Paraxena" in the Greek Pavilion in the Giardini della Biennale.

The exhibition for the Greek Pavilion brings together works from three recent series (2005-2009) of photographic and video works, juxtaposed with a discrete group of works from the mid 1960s.

The three recent groups of works – from the "Nexus", "Chairs", and "iMovie" series – have not been widely seen outside of the USA, they will be shown alongside a major video installation "Ecdysiast and Viewers" (2006), which is on loan from the collection of the Museum of Modern Art, New York.

The "Chairs" and "Nexus" series are photographic works, which further extend Samaras' radical use of photographic technologies (a dialogue that began in the late 1960s with his first experiments with Polaroid technology.) Both photographic series originate in images taken during Samaras' walks through New York City. They present a kind-of hallucinatory urbanism. The "iMovie" films (beginning in 2005) take this sense of 'strangeness' – alluded to the exhibition's title "Paraxena" - into Samaras' domestic environment, and his everyday routines. These recent works will be shown alongside the major installation 'Ecdysiast and Viewers', in which Samaras films the reactions of peers and colleagues (inc. fellow artists Chuck Close and Jasper Johns, and Artforum editor Tim Griffin) whilst observing a video self-portrait in which Lucas lays himself bare for the camera.

This frank self-portrayal in "Ecdysiast" is amplified in a group of three sculptures from the "Jewels" series of the mid 1960s, which represent three extremities of the artist's torso: the head, the groin, and the feet: a form of "incomplete" self-portraiture.

The final work - which will be the first work the visitor encounters - is a major mirrored structure "Doorway" (1966-2007): Upon entering the pavilion the viewer will be confronted with a reflected image of themselves. The work's title "Doorway" is apt given that the work will occupy the threshold between the exterior space of the Giardini gardens and the 'interior' space of the pavilion and Lucas Samaras' work.

The "reflected" image of the viewer sets up a "narrative" that runs throughout the exhibition: where the issue of being observed, by both oneself and others, and the activity of observing are central devices in the work. Together the works create a fluid conversation that articulates many of the persistent themes of Samaras' work.

The exhibition privileges Samaras' most recent work, but does so in a way that sets up conversation across four decades of his practice, establishing a historical context for the new work.

This conversation across time is amplified in the publication, the first section of which consists of a "visual essay" of images of Samaras' work – with at least one image for each of the 50 years Lucas has been exhibiting.

Lucas Samaras' show at the Greek Pavilion in Venice will take place on the 50th Anniversary of his first solo show in 1959 at the Reuben Gallery in New York.