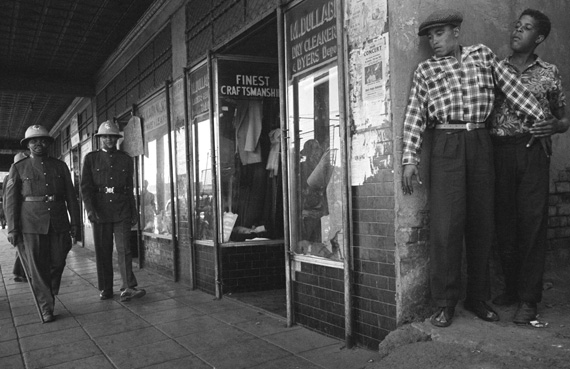 Flo Peters Gallery will be showing photographs by Jürgen Schadeberg from April 8th until May 23rd, 2009. Jürgen Schadeberg, born 1931 in Berlin, emigrated to Johannesburg, South Africa at the age of 19. Thanks to his photographic education, he started to work as photographer and art director immediately after arrival. He spent more than 35 years - with interruptions - in this country. During this time he witnessed several serious ongoings: Apartheid, riots, independence, Mandela's return to politics - upheavals and changes that he has captured impressively as a photographer. Aside from a number of lectureships, he also took pictures for the European and the US press, among them Stern, Die Zeit, Time Life and The Observer. When he returned to South Africa from Europe in the mid 1980s, his work transformed from a purely journalistic to a more artistic orientation.

Jürgen Schadeberg is known world-wide for his characteristic way of lacing photojournalism's neutrality with narrative subjectivity. He has always succeeded in keeping the balance between showing his individual view of the world without locking it to just that one perspective. The photographs document global contemporary history on the large and on the small scales, yet they always generously grant the viewer leeway to investigate, to analyze and to recognize. Jürgen Schadeberg's visual language is primarily journalistic and documentary, but attains its artistic depth by symbols and references beneath the surface. His oeuvre is to be seen as a multi-layered reflection about society, bound to their respective time and space. The exhibition shows works from South Africa as well as from the early 1960s London, from the 1970s Berlin, from Paris and New York. Being a retrospective it gives comprehensive insight into his life's work.