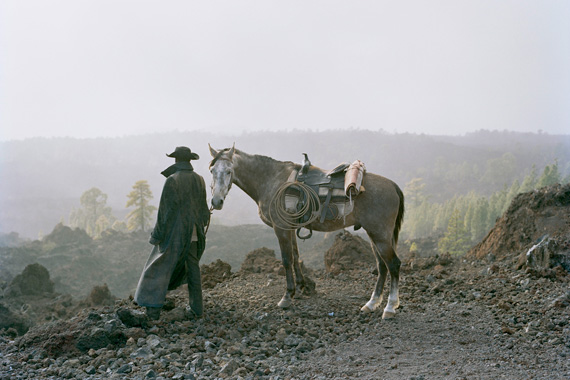 The Leyendecker Gallery has the intention of presenting the new photographic series of the German artist, JULIAN ROSEFELDT, with the title "American Night".

By reason of the Second Biennial of Architecture, Art and Landscape in the Canary Islands, the Canary Islands Government, the Leyendecker Gallery and the Kunstmuseum in Bonn are producing the new project by Julian Rosefeldt, a 16 mm film which will subsequently be shown at the new Museum of Contemporary Art in Tenerife (TEA), by way of a video installation with five simultaneous projections.

In parallel, the German artist is making a photographic series under the same title made up of eight 106 x 159 cm images.
The photographs are a reference to the work of Caspar David Friedrich (19th Century). They are taken in a number of different locations in the Canary Islands, which have great plasticity and this means that they are like the sublime romantic landscape used by Friedrich.

The figure used by Julian Rosefeldt, the cowboy, shrinks in the same way as the romantic traveller when he faces the unknown. Just like Friedrich, Rosefeldt chooses real landscapes, which is emphasised by his use of the photographic medium without manipulation.

In "American Night", Rosefeldt decontextualises the figure of the cowboy (also known as the Knight of the prairie) and situates him in the antithesis of his natural habitat, the great North American prairies. Therefore, the soul of the character faces the landscape from the summit of the mountain, from the shore of the sea, he faces craggy mountainous landscapes, with a cold light where he irremediably becomes smaller, where one of the myths of imperialist culture, of conquest, loses meaning, where man abandons the western and becomes submerged in romanticism... where the human condition recovers its fragility which had previously been abandoned in favour of the myth.

A reality which has been rediscovered at the beginning of the 21st Century with the swaying of the world economic model.