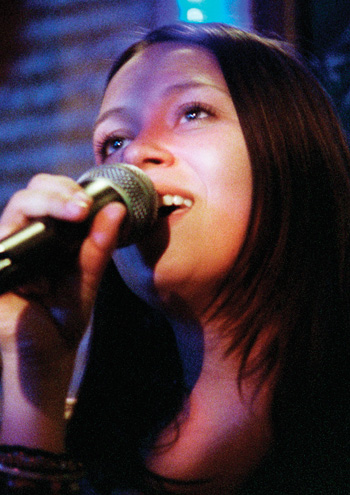 Seminal critically examines the dynamic between mass media production and pop culture internalization.The work operates under the assumption that through its dependance on mass media, the contemporary ideal of pop culture has abandoned content through its emphasis on production and marketing process.Here, both static and moving images, as well as sculptural objects aim to construct a modular monument to the material byproducts intrinsic to American pop culture. Seminal unfolds in three stages: the allure, the production, and the promotion.

The projected video of a tinsel curtain is an entry point - a gate to fame and stardom.It shivers sensually back and forth, glimmering brightly and inviting us to penetrate it; to know it as a kind of mythical silver portal that guilds with fame all who pass through it. It beckons us to join it, to exploit its purpose, and to be mesmerized by its presence.As spectators to such an event and consumers of its result, we are in a state of perpetual distraction, like being trapped inside of a magician's act that uses light and smoke to divert the eye away from the site of the illusion.The curtain's shine drowns the pop icon with a glow of desire - a radiation that dissipates all defining dimensions of a specific, defective identity.Seminal seeks to step through the curtain and to engineer a return path through it by recycling and aestheticizing the objects that function as evidential vehicles of the illusion.

An instance of this engineering is "Three Songs" an edition of five hundred twelve inch translucent vinyl records, encased in clear vinyl record sleeves, and housed in clear, cubic, wall-hanging shelves.The sound on the record (each one is identical) consists of audio recordings of people singing karaoke, in which the background music has been removed.Just as this process of removal exposes the singer's voice and makes transparent the off-key tones, lyric mistakes, and wrong tempos, the translucent aesthetic of the piece itself exposes the disregarded necessity of its physical object.Through this process of formalization, the object gains importance as an artifact of the legitimization of imperfection, creating a monument to the gesture of imitation.

Monolithic stacks of offset prints emulate the mass-produced form of the promotional flyer or band photo - necessary minions of the perpetuation of pop. This is the final - and most crucial - stage of the illusion.Grainy images of people singing karaoke bemuse vernacular snapshots for reproductions of images of "real" singers, introducing an element of ambiguity that is both confusing and provocative.This ambiguity is the armature of promotion that both justifies and nullifies itself.To accept the illusion of these images with sincerity is to mentally construct their validating context; to imagine a concert or pop identity that carries with it the manifestation of dreams and aspirations.However, to doubt their authenticity is to revoke that catalyst which fuels the entire system - basic human desire.

By using karaoke - the ultimate form of pop culture regurgitation - as source material, Seminal turns the pop system on itself and examines it through a combination of both the aesthetics of the objects that embody its production, and the dreams of the mystified participants who perpetuate it.The result is the creation of fiction from an individual's idealistic truth; a return journey through the glimmering curtain of aspiration.