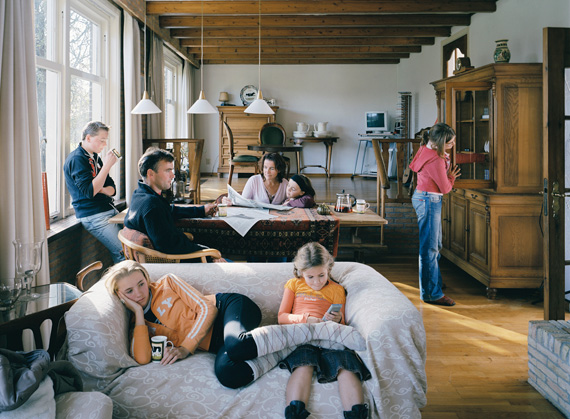 In the Full Light of Day

This spring Huis Marseille will proudly present a selection of roughly seventy daguerreotypes, photographic portraits of the distinguished Haarlem family of printers, the Enschedés. It is the first time that these portraits will be on view to the public.
The daguerreotypes date from the period 1839 to 1856. Among the exhibited photographs is also the very first photograph to appear in the Netherlands. This is a daguerreotype taken from a pastel portrait of Johannes Enschedé and is dated September 1839, almost immediately following the announcement of the process on August 19 of that year. In connection with this special exhibition of early family portraits at Huis Marseille, a publication will be produced. Johan de Zoete, curator of the Museum Enschedé, has written a photographic history of the family, in which the origins and development of these daguerreotypes are documented in an outstanding manner. Saskia Asser, curator of Huis Marseille, places the Dutch practice of daguerreotypy in an international perspective. Herman Maes, conservator of photographs at the Nederlands Fotomuseum, provides an account of recent conservation work on this collection. The exhibition has been realized in close collaboration with the staff and board of Museum Enschedé. On view concurrently with this presentation of old family portraits at Huis Marseille is Dutch Households, comprising the contemporary and topical family portraits of photographer Taco Anema.
The immediate response of the Enschedés following the news of photography's invention give reason to assume that they recognized its importance. In any case, this new type of portraiture was so intriguing that several members of the family put it to the test and had their own portraits done. Their enthusiasm was considerable. The complicated daguerreotype process--which did involve some risk--was mastered by them, and they operated the camera themselves. Nowhere in the world have so many daguerreotypes of one family (not even a royal family) been preserved: there are precisely one hundred of the Enschedé family. This collection constitutes part of the Museum Enschedé, a thorough and well-documented archive of the family and their business. That is unusual, because most daguerreotypes in the Netherlands are anonymous, with respect to the makers as well as the subjects. Including the Enschedé portraits, 850 of these daguerreotypes are known to exist in Dutch public collections. In terms of its size, the Enschedé collection is surpassed only by that of the German daguerreotypist Adolf Schaefer, which comprises 124 daguerreotypes: these are not portraits, however, but images of Javanese antiquities and the Borobudur. (Print Collection, University of Leiden).

Dutch Households : Portraits of families in the Netherlands

With his series Hollandse Huishoudens (Dutch Households) Anema shows just how removed today's family portrait is from the stately, occasionally rather forced-looking group portrait of the past, which has been handed down to us on small and intimate silver-plated copper plates. Anema's group portraits are scenes, or tableaux vivants. An informal, socially and sociologically inspired outlook lies at the heart of these. Furthermore, these large-scale color photographs are curiously reminiscent of the idiom in family portraits painted in the early part of the previous century. Taco Anema's households are indeed more 'tidy' and certainly less caricatural than what the Dutch refer to as 'Jan Steen households'. But they are also warmer and of a more casual atmosphere--more convivial and Dutch--than, for instance, the highly formalized family portraits by German photographer Thomas Struth. They convey less tension than the masterly but complex group portraits of Rineke Dijkstra. Not only does Anema's work show a strong stylistic development of the family portrait; his photographs reveal the extent to which the Dutch family is changing--and has changed.

Taco Anema (1950) has his origins in the tradition of documentary photography, which has become highly developed in the Netherlands. The development of Anema's work, from the 1970s up to now, runs parallel to this tradition. Following his study of sociology at the Vrije Universiteit in Amsterdam, Anema decides to become a photographer in 1975. He buys the book Sweet Life, an absolute masterpiece by Ed van der Elsken, and a Nikon Nikkormat camera with a 50-millimeter lens. In those days a good photographer was a leftist photographer, and photography was an instrument for activism.
Anema's first published series of photographs deals with the squatters' movement, particularly with the squatters' riot in Amsterdam's Vondelstraat. His black-and-white photographs appeared in the popular magazine Nieuwe Revu (now called Revu), then the second-best periodical (after the progressive Vrij Nederland) for publishing photographic essays.