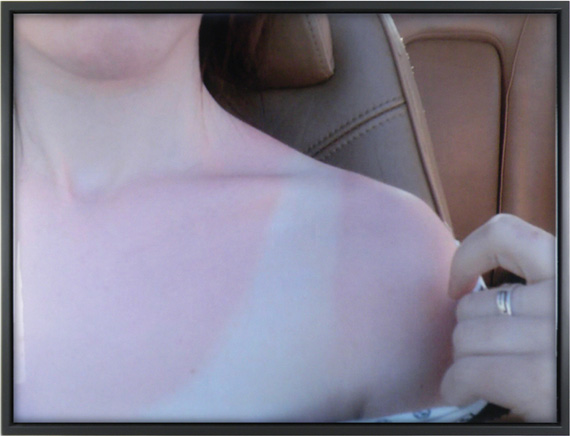 My space is very private. If you enter, I decide when you should leave.

Bø: I was depressed and lonely. Wherever l looked there were: fields, forests, mountains, lakes ... I turned 360º. A deer ran over the farm and then a hare. Instinctively I withdrew within myself.

It is so beautiful there, snow and mountains. Nature: to climb trees and slide on the waterfalls. But I wished for something else, something ugly, pavement and smoke, pollution even, not to suffocate.

Then my house burned down. I sat in a folding chair in the garden and looked at the fire as if I was at a drive-in cinema. Dad took pictures. He liked the distance allowed by the lens. I took one too: when the house was half there, half gone, burnt, but still fighting. I put it in the family album, next to the pictures from my birthday.

Later: weeds and small flowers spurred, grew. Then I cried. Delayed reaction. I suddenly felt the pain you have when you lose a good friend.

I ran into the forest. Looked for oppressive, depressive, unbearable calm. Or the sounds of nature, of the water falling. I felt something exterior to myself, something bigger. I turned around and discovered: America. Boys and girls sitting in their newly polished 50’s cars, shagging and smoking. I knew that in a few hours they would go racing in the streets. Then someone might die heroically, like James Dean.

I thought that Bø in Telemark had become another part of America. That soon we would be shooting each other out of boredom. I thought: the lack of action, reaction, is a dangerous thing. I would lie around waiting for the sun to cover my face with freckles, for my hair to grow long, for a guy who was good enough for my virginity, for a guy who never turned up. I would read books and write about things that never happened. Invent tales of incest and bad behaviour.

Then one day I put on my boots, ran through the fields, the forests, the mountains… all the way to the city. I needed something different, something ugly, pavement and smoke, pollution even.

In his works, Ole John Aandal uses photography to question the politics of the medium and how it shapes and charges our culture. JUVENILIA is the voice of teenagers in a new media world where everybody is an artist and everything you can imagine is real.

Ole John Aandal was educated at the Institute of Photography, SHKD in Bergen, Norway. In 2009, he will do a solo show at Iberia Center for Contemporary Art, Beijing, China. His first book JUVENILIA was just published by Teknisk Industri AS, with texts by Susan Bright, David Bate, Nathalie Herschdorfer, Eva Løveid Mølster and Edy Poppy. Ole John Aandal is a Norwegian artist based in Oslo.

The next show in the gallery, Bunnies, it must be bunnies, curated by Erlend Hammer opens Thursday the 2nd of April with Heman Chong (SG), Mai Hofstad Gunnes (NO), Allen Grubesic (SE), Børre Sæthre (NO), Eve K. Tremblay (CA) and Lars Monrad Vaage (NO)