Gail Albert Halaban - Out my window 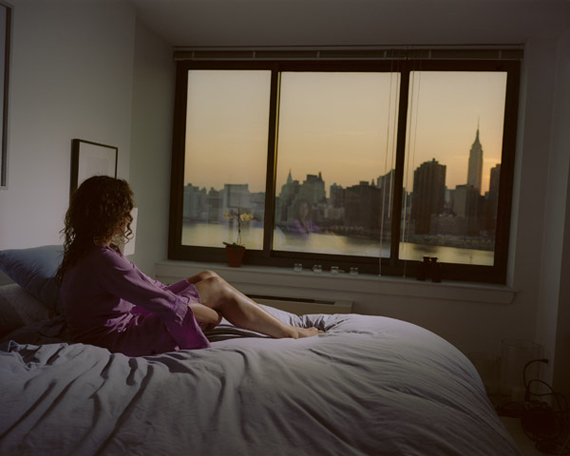 In her latest series, Out My Window, Gail Albert Halaban has ventured into the private spaces of New York City, photographing its inhabitants and the views that define their lives. In a world framed by windows, there is both an intimacy and remoteness in the proximity of so many strangers. Though the archetype of the photographer training her lens on her neighbor is easily associated with the voyeurism of Alfred Hitchcock's Rear Window, the experience Albert Halaban records is far less menacing. In as much as we are aware of our display, the city is also on display to us. Window and camera are inextricably bound in the framing of a world.
New York is iconically identified with the view, and particularly the skyline—those swathes of horizon and bands of light pierced by familiar skyscrapers. But as often as not, the everyday life of New Yorkers is visually defined not by these icons, but rather the more quotidian views of each other's private spaces: the couple across the air shaft, the professional across the street. Proximity both highlights and abolishes such boundaries. Floating thirty stories high above the bustling city below, there is a comfort seeing one's neighbor. They are strangers perhaps only in the sense that they may not know each other's names. Though a word may never be spoken between the two, there is an indelible connection offered by a shared, reciprocal view. While adopting the visual language of photojournalism and its anthropological approach, Albert Halaban also finds precedence in the characters of Edward Hopper's universe, using architecture to suggest the inner psychology of her subject and the subtle interactions of urban life. As with her earlier bodies of work, Albert Halaban has delved into the lives of her subjects, narrating their anxieties and desires through the small gestures, habits, and minor events that make up the rhythm of their lives.

Out My Window is Gail Albert Halaban's second solo exhibition at Robert Mann Gallery. The project was created for her Photo Urbanism fellowship, an ongoing program of the Design Trust for Public Space to encourage the examination and re-imaging of New York's public spaces through photography. Albert Halaban's work has been reviewed and featured in publications including Aperture, The New Yorker, and The New York Times. The artist attended the Rhode Island School of Design, Brown University, and Yale University, from which she received a Master of Fine Arts in Photography.

Initially, Ms. Halaban's pictures resemble formal studies in which architectural grids create syncopating, all-over visual rhythms. Then you notice that there are people in some of the apartments. None of them are doing anything exciting. There is no sex or violence. But there is something compelling about being able to see into the private worlds of ordinary people. The voyeuristic, slightly melancholy effect recalls certain paintings by Edward Hopper.

Ms. Halaban also took pictures of people while in their apartments with them, and these have a poignant intimacy. They resemble photographs by Philip-Lorca diCorcia. One breathtaking example shows a woman wrapped in a bath towel sitting on the edge of her bathtub and gazing out through glass walls over the city.

While the photographs shot from distant windows suggest a kind of surveillance, in fact Ms. Halaban collaborated with her subjects and asked them to pose and position themselves in their homes for the camera. So they are a form of portraiture. Scale is important too. Because the people are so tiny in proportion to the whole picture, there is an expansive effect. And for the same reason, there is a sense of social amplitude: so many buildings, so many people, so many stories in the big city.

Like so many New Yorkers, Halaban can't help staring into her neighbors' windows, but she's made an art of it. Most of her big color photographs are views across streets, alleyways, or airshafts into apartments. A man plays with his dog; a couple cuddle with their baby; the solitary stand in Hopperseque isolation. The fact that Halaban has stages these moments doesn't make them any less resonant of the contradictory impulses of metropolitan life: the desire to connect and the need to be left alone. Voyeurs will be frustrated by Halaban's polite scenarios, but she's playing the good neighbor. Through March 28.