Gonzalo Lebrija THE DISTANCE BETWEEN YOU AND ME 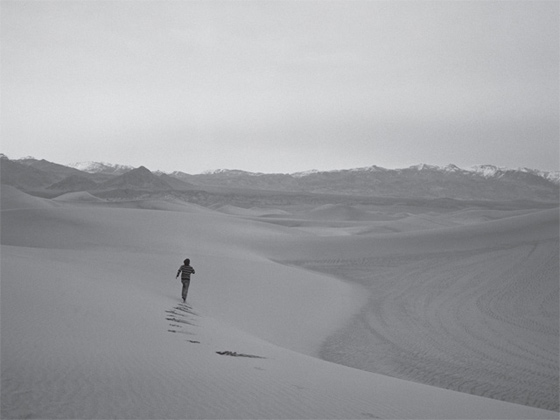 For his third exhibition at I-20, Gonzalo Lebrija will have a project in Los Angeles as part of a one-month gallery swap between I-20 and Mesler & Hug.  Lebrija's exhibition will be presented at Mesler & Hug, 510 Bernard Street, in the Chinatown neighborhood of Los Angeles.

The exhibition, entitled The Distance Between You and Me, comprises four simultaneous black-and-white 16-mm film installations.  The works capture the artist running away from the camera in Joshua Tree, Death Valley, and Yosemite, California.

In each film, the artist first appears from behind the camera only to quickly recede into the distance.  He advances away from the viewer as fast as he can, his speed and agility determinant on the terrain.  The final films and images depend on how far he goes and the many subtle variations in the daylight and scenery surrounding him as he speeds away.  In each setting, Lebrija assumes a different role or relationship to the terrain, be it a determined runner, or a fixed object melted into his surroundings, akin to a rock or a tree.   In these deserted settings, Lebrija makes the flight from the viewer seem like a natural instinct or reflex and possible metaphor for the inherent friction between oneself and reality.  As a visual experience, the simultaneous films offer nuances of light and landscape with hints of truth about distance, the psychological impact of which all depends on how fast he can get away from you.

Gonzalo Lebrija will participate in the Videonale 12 at the Kunstmuseum Bonn, Germany, in April 2009.  The artist had solo exhibitions in Mexico City at the Museo de Arte Carillo Gil, and the Museo experimental Eco; and his works have been exhibited in the Jumex Collection in that city. Group shows include the Centro Reina Sofia, Madrid, Spain; the Kunstlerhaus Bethanien, Berlin, Germany; the National Gallery of Art, Warsaw, Poland; the Cervantes Institute, New York; and a solo show at Ikon Gallery, Birmingham, UK. He had solo shows in 2008 at Galerie Laurent Godin, Paris, and Travesio Quatro, Madrid.

Lebrija was born in Mexico City in 1972.  He was educated at the Instituto Technológico de Estudios Superiores de Occidente ITESO in Guadalajara, and was the co-founder of Oficina para Proyectos De Arte (OPA), a leading exhibition space in that city.  Lebrija lives and works in Guadalajara.

A hardcover catalogue on the artist is being published this spring by Other Criteria in London.