WALTER PFEIFFER - In Love With Beauty 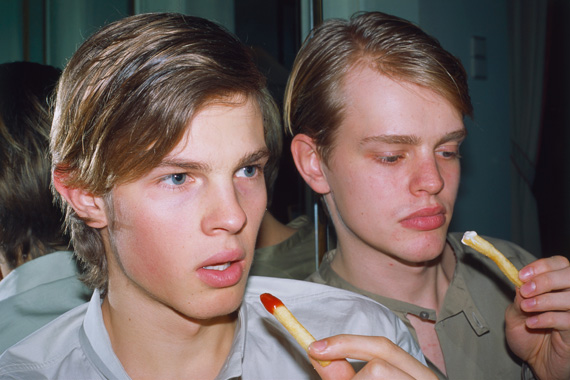 An underground classic for years, Walter Pfeiffer has developed a unique blend of eroticism and wit, classical serenity and ornamental playfulness, artifice and immediacy that has begun to garner major international attention in the past few years. Fotomuseum Winterthur presents an unprecedented chronological overview of Pfeiffer's photographic work, spanning four decades from his beginnings in the early 1970s to his most recent work.

Initially a painter, draughtsman and graphic designer, Walter Pfeiffer started to use photographs as aide-memoirs while working on large-scale photorealist pencil drawings in the early 1970s. But soon Pfeiffer developed a genuine passion for photography. Stimulated by a cast of handsome drifters and stylish women, his very own personal Warhol-inspired "Factory", he began to carve out his trademark style that testifies to both his desire for timeless beauty and his precise observation of the permutations of fashion and style. His breakthrough as a photographer was a series of images of a young man in drag that was included in Jean-Christophe Amman's seminal "Transformer" exhibition in 1974.

In 1981, he published his book "Walter Pfeiffer", whose cheeky eroticism and raw immediacy was in perfect tune with the Punk / Wave movement. For most of the 1980s, Pfeiffer embarked on a quest for male beauty that culminated in "Das Auge, die Gedanken, unentwegt wandernd", a 1986 series of b/w close-up portraits of young men, whose elegant reduction was the result of years of study and experimentation.

Subsequently, Pfeiffer dedicated himself to drawing for a number of years, only to return to photography in the late 1990s. In 2001, he published "Welcome Aboard", an overview of recent and past photographs, which proved that he has remained as youthful and exuberant as ever.

This autumn Walter Pfeiffer was awarded the Grand Prix Design 2008 from the Swiss Confederation.


The exhibition curators are Martin Jaeggi and Thomas Seelig.


Programme of events accompanying the exhibition "Walter Pfeiffer - In Love With Beauty":
On Sunday, December 7 at 11:30 am, there will be an artist's talk in the Fotomuseum Winterthur with Walter Pfeiffer and Patrick Frey (Actor, Author, Publisher).