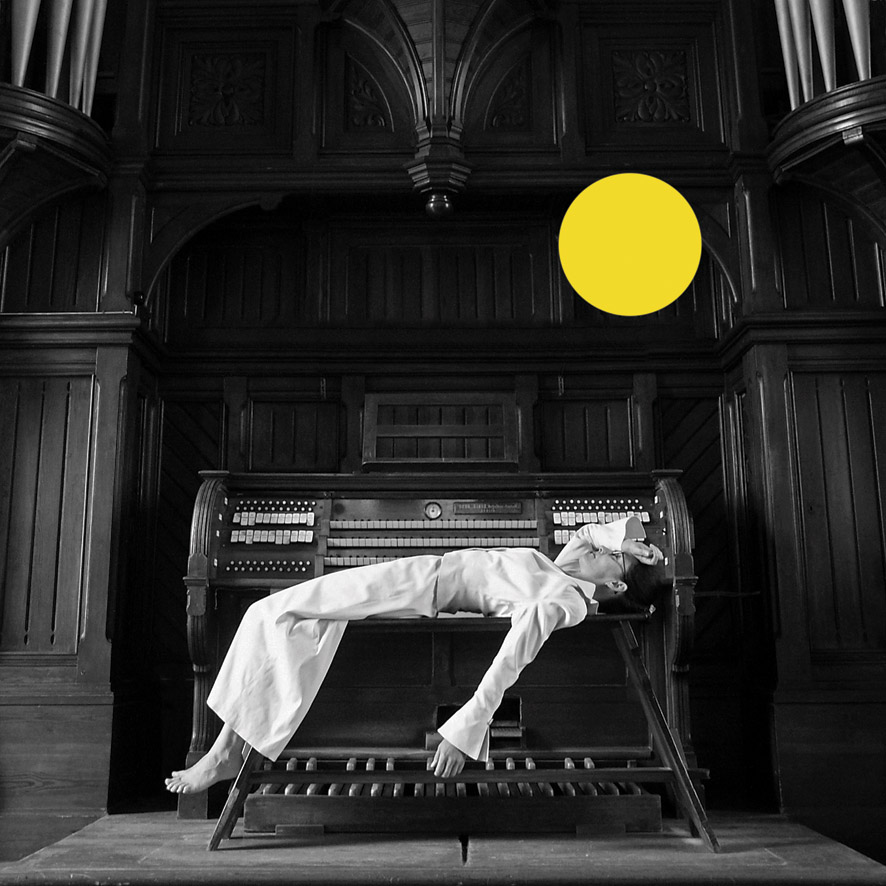 At the beginning of Hajnal Némeths' film “Air Out” we hear an organ performance of J. S. Bachs “Air” and see a close up of a static musicians' back. As the camera zooms out and the musician switches off the organs' air pump, the sound of the piece breaks until it disintegrates into a noisy pattern of keyboard and pedal clicks concluding with silence. We discover that the organ-player, shown in full now, is performing a set of convulsive movements and that she resembles a puppet attached by strings to the gigantic instrument.

As the music mutates there is another performative aspect of the gesture and of the 'instrument-object' that enters the film frame. In “Air Out” even the organs' console appears placed into a niche that resembles a small stage. This transition from audible musical to performative action is also present in other works by Hajnal Németh: in the video “Desney & Destiny” and the photo series “Not Me”, “Guitar Solo” and even “Recording Room”, where strange sound-controlling objects of the recording studio appear like cryptic autonomous sculptural forms.

One of the artists' references are writings of John Cage who in his book “Silence” saw the sound as “inextricably synchronous” with all other sounds and non-sounds. He wrote about constraints imposed on the perception by “instructive” musical instruments, voices and “protective” concert halls. For Cage theatrical or experimental action would be a solution for a different experience inclusive of all other senses and therefore of life.

In the videos “Air Out” and “Desney & Destiny” musicians have turned their back to the camera becoming part of complicated technical instruments. This strongly reminds us of the proposition by a contemporary of Cage: Marshall McLuhan, who saw media and technology as a prosthesis that allows us to “extend” our senses and capacities, but which, at the same time, amputates some natural abilities. Like, for example, aspiration for the sonic perfection deprives us of liveliness of movement or breath. Németh revives these “side-effects” in the field of music. In her works a separate music composition is rather ironically seen as a fetish, which is surrounded by the rich world of strange technical objects, gestures, texts, noises and emotions.