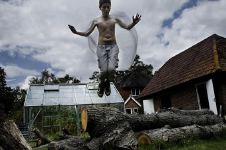 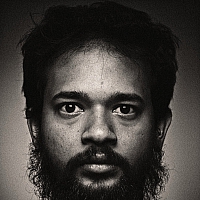 Chaired by photographer Reza Deghati, the Jury has met at Fabrica, in Treviso, to select the winners and was including  the following members:

.
The recipients of the awards are:

F  AWARD
Leonie Purchas, Great Britain
Essay: In the shadow of things
“The jury unanimously voted this exceptional work, carried out in compliance with the award rules and regulations which reward an innovative photographic approach, interested in the human condition. By this prestigious prize, the jury therefore encourages the continuation of this rare and courageous testimony.
Leonie Purchas chose to take an introspective look at herself through the members of her family. Her images genuinely portray this fair, intimist and harsh story of her close relatives, which can tell the story of the whole human family.
Leonie Purchas has started a piece of work, which once completed, may exist through a book, an exhibition, and a film. Through her strong testimony on a part of life, Leonie Purchas will then have written a page of humanity”.

“With this prize, the jury rewards a journalistic piece of work with a keen sense of photographic composition and a modern visual approach of the movement. The jury hopes that this prize will enable Abdul Munem Wasif to improve his testimony on his universe and the world around him”.

A Special Mention has been assigned to:
Jonas Bendiksen, Norway, for the essay The places we live, an exceptional essay shot in 4 megalopolis of the eastern and southern world
and to Norma Rossetti, Italy, for the essay Scampia….periferia nord di Napoli (Scampia… Naple’s north outskirts)


The F award is a creation of Fabrica, the Benetton Research Centre on Communication, based in Treviso, and Forma, International Center of Photography, Milano, a joint initiative of Fondazione Corriere della Sera and Contrasto.

The winning F project will receive a contribution of euro 20.000, the possibility of publishing a book and of having an exhibition of the selected work. The F25 winner (for photographers under 25), will be awarded a one year scholarship in Fabrica’s Photography Department.