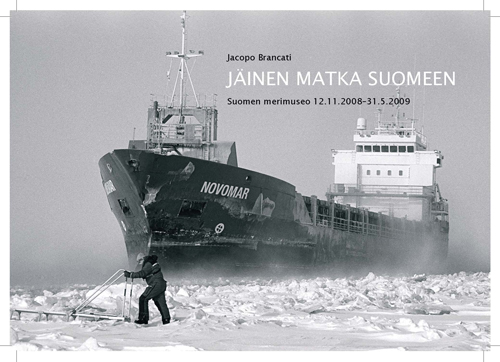 The Maritime Museum of Finland Tornatorintie 99A 48100 KOTKA Finlande 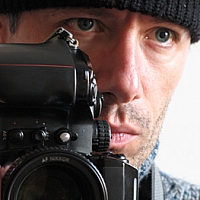 The realization of “Winter Voyage to Finland” is the result of a long maturing of which I was the privileged witness for several months. Four journeys over a three-year period, a camera made unusable due to the intense cold and many pleasant human contacts were needed in order for Jacopo Brancati to finalize his project about the universe of Finnish maritime pilots and traditions.
Carried out with a Nikon F4 and Kodak Tri-X black and white film, the journey is inscribed, by its classical approach, in the line of major humanist reportages which made the good days of magazines such as Time Life and National Geographic.
All photographic exhibitions are polysemous. That’s why it’s always interesting to consider the multiple ways of interpreting a series of photographs: from the view of the “author” of the images to the visitor who contemplates them for the first time.
In just one of these photographs I catch a glimpse of a secret conspiracy in a forgotten story. That’s what I call the miracle of photography. This evocative strength, almost shamanic, of the image that recalls in our minds the memories, real or imaginary, of a past that we believed to have disappeared. The frail silhouette of the man lost in this vastness of ice, pushing the gangway when meeting the steel monster to retrieve his companion who descends the flanks of the beast, reminds us of rock-drawings of ice-age hunters fighting a fabulous beast.
The frost appearing to have taken up a creative madness transforms a metallic guardrail into a marine monster’s jaw with a thousand sharpened teeth. A solitary grave drowned in a sea of dry grass tells us the story of someone who, arriving as an enemy, never returned home. And the complicit, kind smile of the man who appears to speak to the fish in some sort of fourth dimension.
In a more formal way, the “traveller” visitor of this exhibition — because this is an initiating voyage — is invited to go back and forth between the overall views, which each time set a specific scene, and the close-up portraits. This visual alternation sets the rhythm of the whole. It echoes the ceaseless trips of the pilots and the photographer between land and sea; between the pilot cutter and container ships. From one place to another.
The portraits are always respectful, taken on a “human scale” and without false modesty, which is always the signature of good reporters. Patience and real human contacts are required to be able to succeed. This type of photography is demanding. But what a pleasure to be able to contemplate the result of this long project, and to share it with others!
To finish, the “traveller” visitor is invited to consider for one moment this photograph representing a cloakroom containing overalls and working boots. It emanates an impression of waiting, one then thinks about the owners of these uniforms. A group of men linked by the same destiny. A clan with ancestral rules of life?

So where did they go to? They are perhaps in a room close by, just speaking about the weather… Or other things. The image of a strongly-bonded clan of hunters from the time of the ice age appears once more. Come closer. Look carefully. Yet the only things there are oilskins and empty boots.
The magic of photography can be found in the most incongruous places.
Gilles Perrière, Ulan Bator, July 2008.
Infine Arts

Winter Voyage to Finland is the result of a patient, passionate work on the Finnish maritime world that Jacopo Brancati started over three years ago. At that time he has just finished a long maritime reportage in Italy, but the call of the sea is already making itself heard. Just then, in Paris, comes the encounter with the photographs of Ismo Hölttö and with the kantele of Arja Kastinen: the enthralling invitation to discover a country whose face can be seen on travel magazines but whose soul remains partly unexplored. A long bibliographical research reveals him the unexpectedly rich maritime culture of Finland.
Jacopo Brancati chooses to focus his attention on the work and the universe so particular of the maritime pilots, and on the navigation in the frozen sea. He will have to win the notorious shyness of seafaring people (and of the Finns); he will also have to cope with the harshness of winter navigation in the North that during one journey causes the “death” of his Nikon F4.
He is eager but respectful and meditative in his approach to this universe. Black and white film will depict it with precise, all but demonstrative strokes.
- THE EXHIBITION
The exhibition develops through four steps. In the first three sections we follow the author’s exploration of different geographical areas: the south-east (Kotka region), the east (the Archipelago) and the north (the Gulf of Bothnia).
His eye focuses on the work of men, on their skills and everyday life, depicting at the same time the peculiarities of the environment they belong to : ships, harbours, open sea, ice pack...
The fourth and last section – “Memories” – is a touching, respectful homage to the traditions and to the intimate world of Finnish seafaring people.
Sixty large format, black and white fine-art prints made in Paris by the art printer Andres Romero from Label Image.
Infine Arts