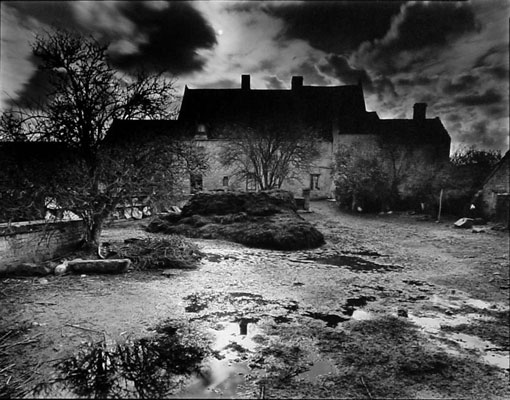 "For beauty is nothing/ but the beginning of a terror we are still just able to bear...."*

In an essay by David Kleinberg-Levin, the author states that Meriel "confronts the experience of beauty with something dark, ominous, frightening: something portending storm, catastrophe, even death." Indeed, the largely dark and heavy atmosphere in Meriel's beautiful images of the French northern Atlantic coast summon the weight of its history with many photographs of forgotten, if sumptuous relics of the past, a heavy feeling of a religion known largely through stone, a landscape seen through heavy clouds, and a frozen sense of time.

Like Atget, the photographs are largely local documents of Meriel's native Normandy, where he lives and sets up an enormous 11 X 14 inch view camera to create single large negatives. These will produce his generous prints, rich like the landscape itself, with their great weight of silver and platinum.

Yet a poetic sensibility in his photographs, echoing the Baroque and the Romantic periods in painting, and in which "'Nature hovers between paradise and catastrophe, life and death, beauty and terror, possibility and impossibility, longing for the one, anticipating the other,"** seems to suggest that there is much more here than the eye perceives. Light seems to gather as a "source of supernaturally intense radiance"***, suggesting a possibility of redemption which could be inversely related to our more comfortable world of light that dispels darkness. This dramatic and lovely world is filled with mystery, secrets, and shadows.

The spirit of Meriel's photographic images calls to mind for me the "Duino Elegies" of Rainer Maria Rilke. In the First Elegy, the poet writes: "For beauty is nothing / but beginning of a terror we are still just able to bear...." These words approach the essence of Meriel's art. In their "enigmatic" beauty, his photographs evoke tombs of possibility. They are, in a consequential sense, painterly: in fact, in their stillness, immobility, and steadfastness, they resemble still-life paintings: what in French would be called, recognizing a process that the English term will not acknowledge, "la nature morte". The resemblance thus goes much deeper than the words for these qualities might customarily evoke, for, despite-or perhaps, contrary to Platonism, precisely because of-their luminous exaltation, their sublime glorification of their own sensuous materiality, his photographs almost imperceptibly touch, with these very qualities, on the immutable, the eternal, the transcendent-the sublimely meta-physical that, as Kant understood, confronts the experience of beauty with something dark, ominous, frightening: something portending storm, catastrophe, even death. The "Nature" that Meriel brings to appearance, brings into the light, is a dark, unpredictable, threatening realm, a realm that, despite its apparent stillness and fixity, evokes impending disaster. His "Nature" hovers between paradise and catastrophe, life and death, beauty and terror, possibility and impossibility, longing for the one, anticipating the other. Seen in a certain light, his "Nature" appears as it might in a Hobbema or Constable: settled into a beautiful, eternal stillness, a paradise of peace in which the struggle between man and nature has somehow been resolved, as if in a final moment of reconciliation. Seen in another light, however, this "Nature", landscape of repose or death-like immobility, appears to be ominously shadowed, everything somehow drawn towards, or into, the mysterious realm of mortification: "eternal stillness" in that very different sense.

Meriel's images are thus, in effect, allegorical; though without any recognizable narrative, they nevertheless partake in uncanny ways of the emblematic qualities associated with a baroque Romanticism: they seem to express, through a certain longing, an inconsolable sadness, an elegiac spirit of melancholy. Torn between a love attentive to the nature of the visible and an equally compelling desire to acknowledge the haunting presence of the invisible, his images are traces of the lost paradise, tombs of remembrance. But in their exposure to the imminent arriving of the future, a stillness-breaking dynamism that their black clouds and heavy shadows and eruptions of impenetrable darkness always introduce, they are also revealing a "Nature" that has already been informed by metaphysical prophecies of approaching disaster, threats to the impossible hope for redemption, a faint hope that the invariably surprising appearance of a source of supernaturally intense radiance somewhere within the image nevertheless encourages.

The conception of "natural history" that Benjamin, drawing on Hegel and Schelling, formulated in his study on the Baroque German Mourning-Play and that Adorno developed in his Negative Dialectics, provocatively suggests a way of interpreting the unsettling experience of Meriel's art. According to this conception, Nature is always historical, never visible as such, never encountered outside the violent constructs of our historically situated consciousness; conversely, however, the world that we have built, forging a historical existence in irreconcilable struggle against Nature's forces of destruction, can never escape its violent conditions and mortifying alembications. All the things that surround us in the world, all the things we take for granted, are subject to Nature's inexorable laws, marked by laws that bind them-and us-to the invisible presence of eternal death. But to experience in this regard the allegorical dimensions of Meriel's art, one must, following Barthes's insightful phenomenology of the photographic image, give the utmost in attentiveness to the spellbinding point in the image where a blinding luminosity will seem eerily to erupt. For there is always, even in his darkest images, that poignant praise of the lighting-that never-failing element by grace of which alone the photographer's art is rendered possible.