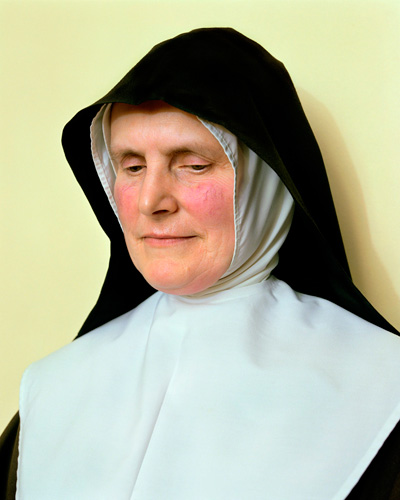 Brancolini Grimaldi is pleased to present "Faith", Jackie Nickerson's first solo exhibition in Italy. "Faith" is a compelling portrayal of a hidden world, the Catholic religious orders of Ireland.

For two-and-a-half years, Nickerson photographed inside the churches, convents and abbeys of Ireland. She was granted unprecedented access to to the private worlds of the religious in their places of work and prayer, some of which had never before been seen by the outside world. Of her experience, Nickerson reflects, "These are individuals and communities which are steeped in an interiority, which they have discovered is not their own but something wider and deeper than themselves, of which they are a part."

The simplicity of Nickerson's images invokes the muted and restrained palette of Fra Angelico, bringing an often beatific air to her tranquil subjects. While never suggesting that she is able to divine or represent the veiled mysteries of faith, Nickerson does manage to honestly present a vocational life driven by clarity of purpose and personal courage.

The visual language is based on the extensive research of religious art and Christian symbolism that provides the foundation of the series. The work is not conceptual nor is it literal. It is full of symbolism using objects, colors, geometric shapes (as found in icon writing), and composition. The emphasis is the concentration of commitment and the resultant physicality of both the sitters and their environment, which goes beyond any specific Christian ritual but can be an example of any life based on total commitment to spirituality.
Jackie Nickerson has lived and worked in Paris, Tokyo, London and New York, and currently lives in rural Ireland. She has an international reputation for photographing people and their environments. In 2002, she published Farm, a book of portraits of farm workers taken across southern Africa. Her work is represented in many important public and private collections, including the Irish Museum of Modern Art in Dublin, the Santa Monica Museum in California, and the Margulies Collection in Miami. Following exhibitions of "Faith" in New York, Ireland, and now Italy, the series will be shown this fall at the Centre Culturel Irlandais as part of the Mois de la Photo in Paris.