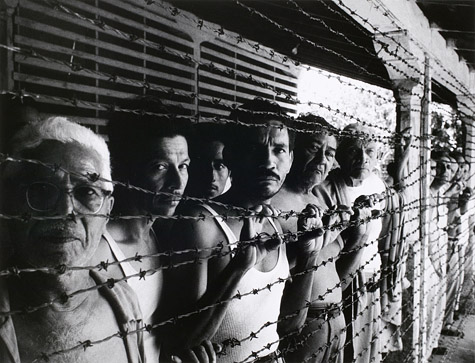 Cornell Capa chose the phrase "concerned photographer" to describe those photographers who demonstrated in their work a humanitarian impulse to use pictures to change the world, not just to record it. In a long and distinguished career as a photographer, Capa (1918–2008) worked at LIFE magazine from 1946 to 1967, and for Magnum photo agency beginning in 1954, covering social and political issues in the United States, as well as England, the Soviet Union, Israel, and Latin America. While creating some iconic individual images, Capa really established his own specific areas of concern with incisive and often controversial photo-essays on health-care treatment of "retarded" children (1954), a two-part LIFE story; a cultural examination of Judaism (1954); the collapse of Juan Perón's dictatorial regime in Argentina (1955), featuring his charismatic wife, Evita; the plight of "stone age" tribes in the Amazon region of Peru (1961–64); an analysis of poverty in El Salvador and Nicaragua (1972–73); and a significant reportage on conditions at Attica (1972) in the year following the bloody prison uprising. This exhibition will look at these pioneering stories through vintage photographs, magazine spreads, and contact sheets, and will serve as a tribute to Mr. Capa as photographer and F