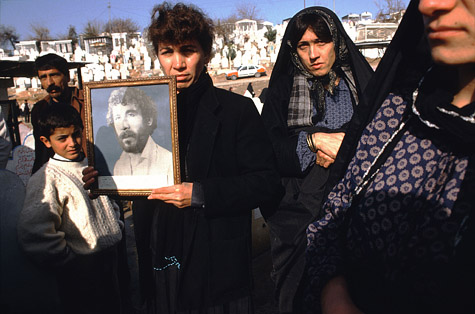 Since the 1970s, questions of ethics raised by documentary practice have been central to debates in photography. Perhaps no other photographer has so closely and consistently represented and participated in these debates than Susan Meiselas. An American photographer best known for her work covering the political upheavals in Central America in the 1970s and '80s, Meiselas's process has evolved in radical and challenging ways as she has grappled with pivotal questions about her relationship to her subjects, the use and circulation of her images in the media, and the relationship of images to history and memory. Her insistent engagement with these concerns has positioned her as a leading voice in the debate on contemporary documentary practice. Susan Meiselas: In History will be the first U.S. overview of the work of this major American photographer, and will be structured around three key projects: Carnival Strippers (1972–76); Nicaragua (1978–present); and Kurdistan (1991–present). The exhibition is organized by Kristen Lubben, Associate Curator at ICP, and will be accompanied by a catalogue including essays by Lucy Lippard, David Levi-Strauss, Elizabeth Edwards, and others.

Susan Meiselas, Photographs of 20-year-old Kamaran Abdullah Saber are held by his family at Saiwan Hill cemetery. He was killed in July 1991 during a student demonstration against Saddam Hussein, Kurdistan, Northern Iraq, 1991 © Susan Meiselas/Magnum