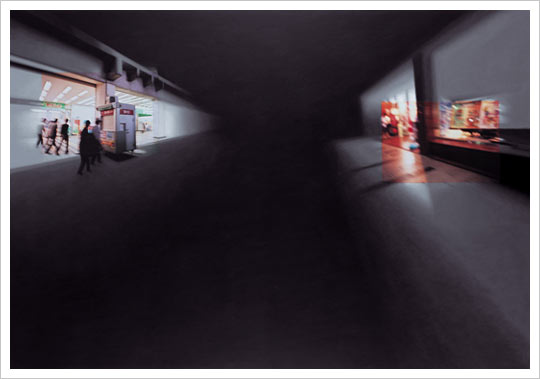 The process of each work by Keisuke Shirota begins with a photograph; one of many random and banal shots he has taken over time.  It is not because of emotional attachment to a time or place that he chooses a photograph, but for his interest in its composition.  Having no clear recollection of where the photograph was taken, it is a combination of memory and creative fantasy that Shirota expands on the image, applying the actual color photograph to a canvas and extending the imagery in black and white. With great painterly skill, Shirota blends the color of reality into a colorless fiction, creating a unified work of art; one that questions memory and the power of photography to give us a trustworthy documentation of its subject.  Like memory, Shirota's paintings fade the further they get from the photograph.  And although photography has traditionally been relied on to document visual fact, Shirota's works show that fact ends very shortly after the end of a photograph.  As we look at a photograph, imagination and blurred memory inevitably play a part in putting objectivity and memory in question.

Keisuke Shirota was born in 1975 in Kanagawa, Japan. He lives and works in Tokyo.