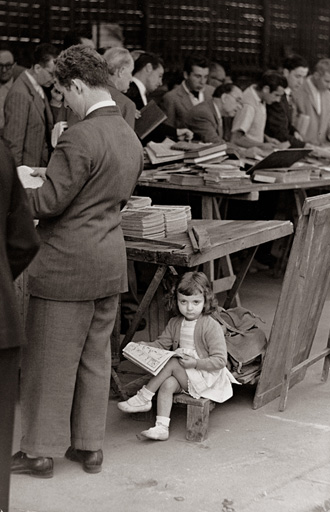 KOWASA gallery presents the exhibition RAMÓN MASATS "LA NUEVA MIRADA". The show offers a thorough overview of more than 70 B&W vintage prints of Ramón Masats, the majority of which have remained unpublished and little known.

There were many innovative Spanish photographers in the fifties who aspired to break from the dominating post-war formality and who aimed to bring forward a new photographic discourse related to the movements of the international avant-garde. However, none among them was destined to occupy such an exceptional position as Ramón Masats. Born early and in a casual form, his singular vision ushered in a radical modernity, profoundly marking the course that Spanish photographic art would take, always on the margin of conformities and endogamic ideologies.

Kowasa Gallery dedicates an exhibition to Ramón Masats with a catalogue of more than seventy vintage prints, the majority of which are little known and have never before been published. Special emphasis has been placed upon the years 1953-1957, when the young amateur from Terrasa was making his own way through the world of photography in search of a personal language. Our aim is twofold: firstly to underline the uniqueness of Ramón Masats, and on the other hand to stimulate a revisionist reflexion that challenges the existing need to inscribe and to pigeonhole his photographic practice in the international aesthetic movements of the era (the New Subjectivity of Otto Steinert, the documentary vision spread by "The Family of Man" show at the MoMA in 1955, and the different manifestations of the Humanist Realism in France and in Italy). It is clear that since his very first incursions into photography, the practice of Masats disobeys any concrete style. Sober but at the same time ironic, dry and realistic, yet imaginative and sarcastic, his vision is fully personal, impregnated by nature with an extraordinary intuitive instinct for detecting the "humanity of the moment".

Like the rest of the photographers of his generation, Masats is conditioned by his time. In this sense, his iconographic resources are delimitated by a traditional register, in which old men, children and farmers abound. Distancing itself from a necessity to serenade or purify, or from superfluous adornments, his creative range is related to reportage as an absolute incarnation of the values of humanist modernity. However, Masats ends up making his own version out of all this: rather than showing, he likes to suggest. In the dense non-figurative images of the early years, which he himself has qualified on various occasions as exercises in the tricks of composition, his intuition leads him to construct his own visual architecture. The precision of composition, the dialogue between material and body, the special treatment of light and the profound understanding of form revealed through a contrasted developing process of his prints, all these elements allow him to generate unexpected juxtapositions within his frames, through which life on the street and the characters found therein obtain new meanings. Masats plays with the established symbolic value of his subjects: he fragments, alters, decontextualizes and displaces these signs, and with great ironic humour subverts the big themes and collective myths of the era in which he lives.

In a similar way, the selection of the material and the layout of this catalogue are imbued with a subjective and timeless criteria, which employs formal associations in order to give visibility to Masats' compositional structure and imaginative register, captured in a time before the author had established his own cultural conception of photography. The selection has not been easy. Kowasa Gallery preserves the major part of the archive of this very first period (1953-1964), about 200 vintage prints. Ramon Masats, who has always lived his creative present in an intense way without conferring too much importance on the past, finds little importance in them. However, by bringing into light this body of work, the binding elements of his trajectory from his first steps until our days are made clear. When Masats first embarked on his adventure of photography in the fifties, he developed a style based on the positioning of forms and their connotations, generating a black and white geometric language. In the eighties, when he came back to photography, he put these very same resources at the service of his colour geometries. There is something more than mere coincidence in this story.

In a letter to Carlos Pérez Siquier in late 1957, Oriol Maspons commented, "Take a note of a name. Ramón Masats, the most complete Spanish photographic enthusiast. He´s ace. He is going to Paris to talk with Ernst Haas and Cartier-Bresson to see if he can get into Magnum". Whilst it may be true that Masats has not become a member of the agency after all, in the eyes of today his early work constitutes an extraordinary historic testimony.

From the out-dated scenes and characters of Las Ramblas to the touristic miracle of "Typical Spanish Luncheons", Ramón Masats was able to conceive what was going on below the surface in a deaf-mute era burdened by the legacy of conservatism. Premonitory to the advent of sixties modernity, commemorated by another big photographer of the time, Xavier Miserachs in his book "Costa Brava Show" (1966), the "Novel Gaze" of Ramón Masats was destined to reveal a reality that was ready to fade once and for all..
Natasha Christia