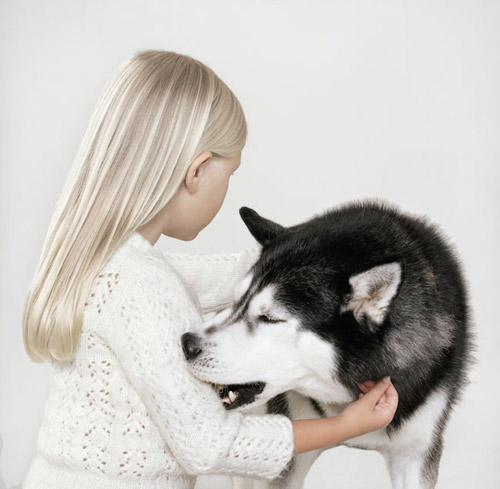 Petrina Hicks' immaculate large-scale portraiture represents something more than individual likeness. Beneath the highly polished and controlled surface of her images lies an eerie, unsettling psychological distance. Hicks' works probe those dualities that are at the heart of contemporary photography - traversing the fine lines between closeness and distance, between perfection and imperfection and between truth and falseness. For Hicks these are qualities that punctuate the continuum from animal to cyborg, her subjects exist somewhere between human and computer creation.

Clear eyed and smooth skinned, her young sitters are almost excessively perfect. The distinction between what was captured on camera and what Hicks has digitally created is imperceptible. In an interesting departure, The Descendants includes a series of video portraits. Hicks further confounds the real and hyper-real by employing a visual convention used in computer 3D modelling, a 360 degree view of a static subject, slowly rotating before the camera/viewer - but in this case her subjects are real rather than computer generated.
Instead of enticing or reassuring us, the works elicit a strange fear. The animals that appear at first glance innocent and gentle, later serve to unsettle us with an ambiguous presence. In Lambswool 2008 for instance, a young blonde subject, almost impossibly neat, embraces a wolfhound, which gently chews on her arm. It is an uneasy pairing.
The strength of Hicks' work is in the way the seductive techniques of commercial photography are subtly shifted. She interrupts the usual dynamic of image consumption. With a deft touch, she transforms her studio portraits into images that speak more broadly about what it is to be human. For her, the ability of advertising imagery to be airbrushed and perfected is echoed in the ability of science and technology to modify our biology in the quest for progress. The works also suggest a sense of nostalgia. The muted tones and the retro costumes worn by the subjects almost suggest we are looking back at our own future, a concept suggested by the series title, The Descendants.

Hicks' startling images have attracted considerable attention since 2002. In a short time she has notched up numerous achievements. She has been listed as one of the 50 most collectable artists in Australian Art Collector magazine and has won several prizes including Sydney Life, Art & About 2004 and the Josephine Ulrich Photography Award for Portraiture, 2003. Her work has been collected by the National Gallery of Victoria and the Art Gallery of NSW and is also held in significant private collections such as Sir Elton John's. She has been exhibited and published widely in Australia and internationally.