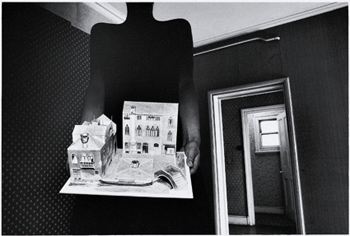 The Fondazione Bevilacqua La Masa of Venice and the Museo di Fotografia Contemporanea of Cinisello Balsamo – Milan present the first solo exhibition in Italy of the work of Victor Burgin curated by Filippo Maggia.

The event constitutes an important contribution to the recognition and promotion in Italy of a key protagonist on the international arts scene.

Victor Burgin, artist and respected theorist of the image both still and moving, was born in Sheffield, UK, in 1941. He became known on the international arts scene at the end of the '60s as one of the founding fathers of Conceptual art, working both with photography and the moving image in his film works. His work draws inspiration and shows the influence of great thinkers and philosophers such as Karl Marx, Sigmund Freud, Michael Foucalt and Roland Barthes.

Victor Burgin has always developed his theoretical reflections alongside his artistic practices. Even when he started to couple his traditional photographic language with that of the digital and video image around 1990, he continued to add new elements to the theoretical debate thanks to his exploration of the new audio-visual technologies and his constant and careful reflections on the evolution of the media society. In his artistic production, Burgin exploits elements from a range of different fields of experience: from advertising to journalism, from art to psychoanalysis, from fashion to magazines. This gives his work the form of a meta-linguistic reflection, one in which images and text flow one after the other or clash against each other, and in which the conceptual framework never obscures the originality of the form.

The concept of representation is one of the key elements of his work. It is though representation that the individual puts together his/her own subjectivity, and it is again through this process that society as a whole takes shape and reproduces itself. This is the reason that leads Burgin to underline the importance of the concept of the “responsibility of the artist”.

The project that the Museo di Fotografia Contemporanea of Cinisello Balsamo (Milan) and the Fondazione Bevilacqua La Masa of Venice have put together includes the artist’s producing a new video, Alle 8 solito posto, to be projected contemporarily in both exhibition venues. The video, inspired by the closing sequence of the film The Eclipse by Michelangelo Antonioni, brings together footage shot in Venice, in the outlying district of San Basilio, along with images gathered during a visit to Milan, around the Monte Stella area.

The volume published by Skira, Components of a practice, serves as a catalogue of the two exhibitions, featuring works and writings by Victor Burgin. The book is entirely different from the previous publications on Victor Burgin’s works, as despite the fact that Burgin is widely recognised not only as an artist but also as a theorist, a book has never before been published in which he turns his critical eye to his own artistic production. The proposed monograph is designed to fill this gap