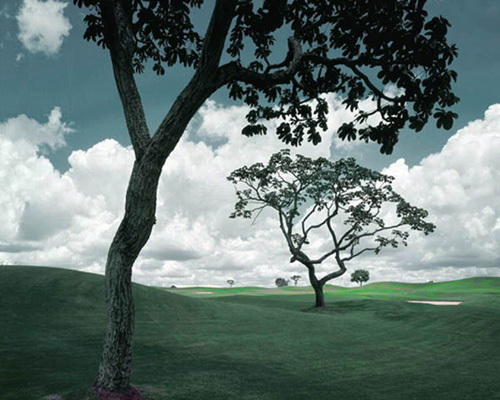 Galeria Brito Cimino presents não tem coisa certa, a solo exhibition of works by Caio Reisewitz. At this show, the artist brings before the public 18 photographic images that render his reflections on the landscape, the ever-changing natural environment, and their occasional encounters.

Caio Reisewitz is known for his studies about the São Paulo architecture as well as landscapes that seemingly were shot in the heart of the jungle but that, in fact, come from the vicinity of the city of São Paulo. In a way, his photographs evoke dreams that have materialized in the Brazilian territory, a land frequently cited for its prodigality and natural beauty.

Virgin forest, desert land, vegetation growing in man-made spaces and the humanized landscape are themes addressed at the exhibition. Thanks to the artist's careful attention to details, viewers perceive the human influence in each of his photographs. Even though there is no person to be seen, the consequences of human actions are present through buildings or other interventions. Caio Reisewitz points out a before and an after in terms of nature: "whereas the 'before' challenges us with its virginity, the 'after' startles us by showing the mistakes we have made, which are also sublime and rather terrifying."

At the show, five large-format photographs will embrace the spectator with their bulk, their texture and their rich details. In addition, 13 small- and medium- format works will be on display.