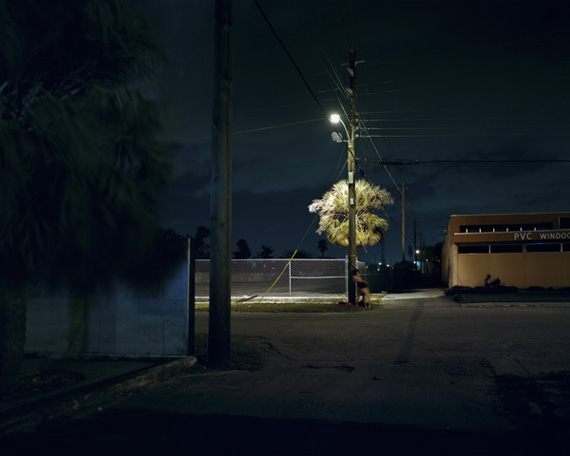 Walt Whitman, -A Woman Waits for Me


Everyone ditches their trench coat in this series by Gerald Förster titled with the spy novel like sobriquet Nocturnal. Lush nudes flanked by cityscapes have a heightened effect because of the painterly light he captures streaming through kaleidoscope foliage. His precise balance of abstraction and clear representation unfold a sequence of perceptions peppered by glimmers of recognition that ultimately allow one to conclude these results are hardly accidental. The velvety vibe of the prints exudes all the juicy allure of a dream without the graphic gloss. Each is an origami undone to reveal a cornucopia of scenarios and types of couples choreographed by Förster in New York, Los Angeles, and Miami. Some have distinct landmarks and others are literally someone's backyard. Förster shoots Nocturnal as still lives or architectural portraits whose human presence is enriched against panoramic, technicolor skies. Simple voyeurism is raised to a new level by inviting the viewer to participate in the dialogue of rebellion and the dangers of sexual transgression.

The Nocturnal series creates intimate, sexually charged scenarios within the context of elaborate and oddly disconcerting landscapes. Förster utilizes the scenarios as a vehicle to explore the powerful tensions between intimate physical contact and alienating physical context. They are nuanced studies in the divided nature of human intimacy as well as elaborately constructed visual metaphors for the beauty and mystery elicited in the open disregard of social taboo. Each exemplifies the exhilaration of liberated sexuality in a lost, isolated world. Within the nightscapes, human figures bound in the act of making love blur beyond distinction. Their physicality is simultaneously elevated and diminished making them appear ghostly, translucent, and immaterial.


A culture's definitions of sexuality and its place in daily life are oft defined between public and private spaces. The majority of the population holds intercourse as an activity reserved for closely guarded spheres or isolated pleasure zones definitively separated from the wide open great outdoors in accordance with conceptions of propriety. There is the seedy motel room for hourly hire to indulge in the dirty love affair or a secret rendezvous, perhaps a gentleman's club for an evening out with the boys; for women there are parties where toys can be bought rather than Tupperware or a class taken at the gym to combine aerobics with learning to strip and pole dance, but in general sex is done at home.