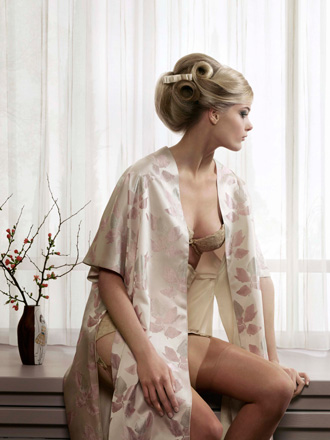 Erwin Olaf
In his portrait photographs Amsterdam-based artist Erwin Olaf plays games with the idea of cold reality versus cruel artifice. His recent imagery is based on American aristocracy in the early 1960s. It blends journalistic details with staged emotions. In Grief, Olaf's latest series currently on show, solitary figures brood in tearful silence, capturing that precise moment when innocence, hope and joy were all lost. Nothing is as it seems and in Erwin's recreated world, nothing is real.

"Grief is a series about the choreography of emotion, and what you can create in the studio," says Erwin Olaf. "The more realistic that much art photography is becoming, the more I try to create an artificial version. Realism in photography can be just as artificial as realism in the world outside. So I wanted to ask the question: how does grief really look? What is the aesthetic of grieving? In my portrait of Grace, even though you don't see her face, the way she is standing with her head tilted, how she looks out the window, the way the handkerchief is crumpled in her hand, tells a story. It's the same as when you watch a movie. You might start to cry, even though what you see is fake."

Text by Jonathan Turner for Tableau Fine Arts Magazine
Ruud van Empel
Ruud van Empel was born in Breda, The Netherlands, in 1958. If there's a place in the world that ever gave humanity the most remarkable examples of creativity, talent and artistic skills, that would be The Netherlands. Dutch and Flemish artists started a tradition back in the XIV century that competed with the most important exponents of the Italian Renaissance, and never stopped ever since: Bosch, Bouts, the Van Eyck brothers, Rembrandt, Vermeer, Van Gogh, Van Doesburg, De Kooning, Mondriaan. The list of talented artists is overwhelming. If all of them have something in common, in my humble opinion, I think that would be the exquisite way in which they combine colors, the brightness of the images given by new techniques such as oil (which they created), the high quality in every detail and the realistic representation mostly in clothes that was never achieved before. And these are characteristics that for sure we could find in Ruud van Empel´s art.

Ruud van Empel worked in the "art industry" all his life; he worked in theater and graphics as a designer, as well as in the film industry. But nothing seemed to be more powerful than his love for photography, and back in the nineties he started experimenting with black and white images and finally introducing color. Color is such an important issue in his production because van Empel created scenarios (most of them organized in series) of extraordinary richness in details such as the ones his ancestors would create in the Flemish gardens they painted where hundreds of different kinds of plants could be identified. The artist, instead of using oil, which helps to make something real come alive, instead, he paints the photographs. There's no way an image could get more real than that and even though, we are still facing magic. Because no matter how vivid the image appears to us, we are in presence of an illusion and the artist becomes the biggest illusionist of all when we believe in what we see.

Text by María Carolina Baulo for Next Level Magazine