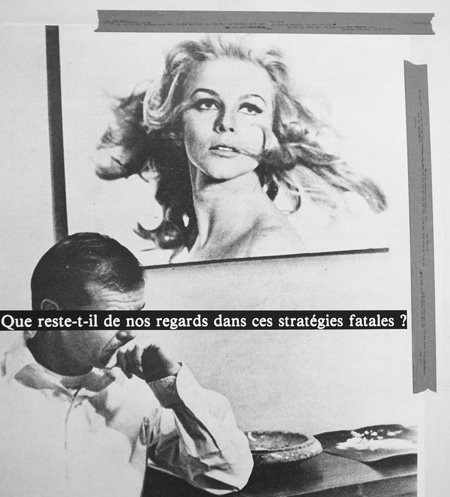 Monika Sprüth and Philomene Magers are pleased to present Astrid Klein's exhibition 'Les tâches dominicales'.  Born in 1951 and trained as a painter and sculptor, Klein is a manipulator of the photographic medium. Her photographs, paintings and installations contaminate, deconstruct and revive the relationship between the photographic image and text and can be interpreted as a metaphor for the estranged personal self and its representation in society. Like the work of Barbara Kruger and Cindy Sherman, Klein's art is an expression of the burgeoning media culture of Western society in the 1970s. While her work is well established in Germany, the exhibition 'Les tâches dominicales' (Sunday Work) at Monika Sprüth Philomene Magers is her first solo show in Britain since her 1989 exhibition at the ICA (curated by Iwona Blazwick and Andrea Schlieker). The current show consists of a series of collage-based works Klein made in Paris in 1980. The title refers to the artist's concept of making a collage every Sunday.

Upon entering the exhibition the viewer is greeted by his/her own image: a large mirror, placed on the opposite wall, presents visitors with their own reflection. This reflection, however, is distorted since the mirror surface has been smashed so that our image becomes fragmented and estranged. Next to this work, entitled Don't look at me, is a series of large photo collages from 1980 which have never been presented outside Germany. During her residency at the Cité des Arts, Klein appropriated the so-called 'photo roman', a highly popular form of pulp fiction fusing the seductive imagery of cinema and the narrative structure of the comic strip. Combining elements of the romantic novel and spy stories, the representation of the female character in the 'photo roman' was highly charged with problems of the scopophilic voyeurism of the male gaze and the fetishisation of the female body. These images provided Klein with the opportunity to analyse questions of representation and perception of women in mainstream culture, which at the time were being discussed by theorists such as Laura Mulvey. Klein, who calls herself 'a feminist by genetics', was fascinated by the power of the female in the films of John Cassavetes, Jean-Luc Godard and R.W. Fassbinder. Yet, it is the combination of the boldness of the photo-roman imagery and the uncanniness of image-text relationship that makes her work so compelling and unique within the classic German art canon of the post-modern era.

Unlike her German contemporaries, who in the mid to late 1970s followed the Düsseldorf Bechers School, which would eventually establish the 'new sobriety' aesthetic of German photography in the 1980s, Klein chose a different path. What is so unique about her oeuvre is its engagement with identity politics and German history while exploring a highly original aesthetic, based on the reduction of colour to black and white, the combination of different media (screen print, photography, installation), and references to popular mass media imagery, which is symptomatic of a post-modern approach to art. While her earlier works deal particularly with the representation of women in mainstream media (and these include film stars as well as the 'Baader-Meinhof' group), Klein developed a more subtle abstract approach in the 1980s, whereby the manipulation of the photograph and the relationship between word and image became increasingly complex.
The layering of different materials, the enlargement of the photographic grain and the play with the negative image lead to a new series of works, which dealt with issues of perception and estrangement. When Klein returned to text-based works in the 1990s, she experimented with new materials such as neon light tubes and glass plates. In her recent paintings she further blurs the boundaries between word and form. Klein's work is characterised by the tension between meaning and language (visual and textual), a profound interest in the uncanny quality that underpins all forms of representation, and a deep passion for the poetry of the language.

Klein has participated in a number of key exhibitions, such as the important Von hier aus, Düsseldorf (1984), the 42nd Venice Biennale (1986) and Documenta 8 (1987). She took part in a number of major photography exhibitions, such as Photography in Contemporary German Art 1960 to the Present at the Walker Art Centre, Minneapolis (1992), Photographie des 20. Jahrhunderts, Ludwig Museum, Cologne (1996) and Deutschlandbilder, Martin-Gropius-Bau, Berlin (1997). Recently she has been included in major exhibitions on German history, including the RAF exhibition (Zur Vorstellung des Terrors. Die RAF Ausstellung, Kunstwerke Berlin, 2005), and the show Klopfzeichen, which investigated the relationship between East and West Germany in the 1980s (Klopfzeichen: Kunst und Kultur der 80er Jahre in Deutschland, 2002). In Britain Klein's work was included in a number of exhibitions in the late 1980s, such as a solo show at Gimpel Fils (1987) and the ICA (Astrid Klein: Photoworks 1984-1989) and the group exhibition Shifting Focus at Arnolfini Gallery and Serpentine Gallery (1989).


The film screening 'Not the Girl Who Misses Much: female filmmakers around 1980' presents major works by key artists including Chantal Akerman and  Pipilotti Rist as well as the British filmmakers Jean Matthee and Tina Keane, who will be available for a discussion after the screening. This event has  been curated by Maxa Zoller and will take place on the 22nd of April at 7pm.