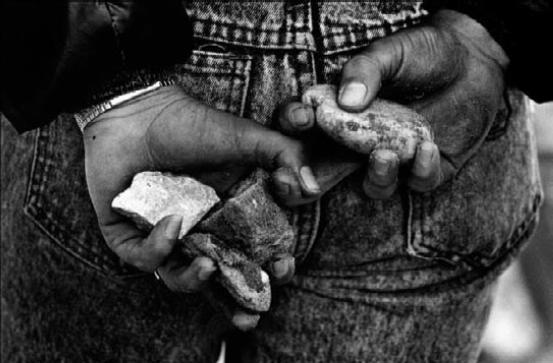 HOST gallery is pleased to announce a new exhibition of compelling and important photography by Judah Passow, one of the UK’s leading photojournalists.
In the run up to the 60th anniversary of the declaration of Independence of the State of Israel on May 14th, Shattered Dreams revisits the Israeli-Palestinian conflict in Israel, the Palestinian territories of the West Bank and Gaza, and Lebanon.
Photographed on newspaper and magazine assignments over the past 25 years, Judah’s images are more than simply a journalistic record of conflict and turmoil.
They are the product of a very personal journey of exploration across the emotional landscape of the country in which he was born, and for whose survival he once wore a uniform and fought.
The shattered dreams he explores are those of his generation’s vision of an egalitarian society built on social tolerance and economic achievement. From both sides of the Israeli-Palestinian divide, Judah uses his critical eye and signature black-and-white photography to take us on an empathetic journey to a place where people glorify their past, curse their present, and have difficulty imagining a future.
A winner of four World Press Photo awards for his coverage of conflict in the Middle East, Judah Passow’s photographs have been widely exhibited in the UK, USA, France, Holland, and in Tel Aviv, Israel.
Shattered Dreams: Israel and the Palestinians is published in book form by Halban, in March 2008, and will be launched at the exhibition opening with signed copies available from the gallery during the show. A gallery talk by Judah will take place at
HOST on 10th April against the backdrop of his unflinching photography.