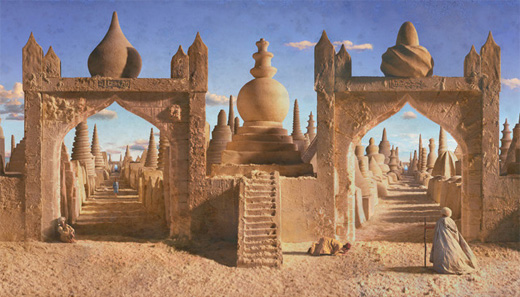 Defying easy classification, the work of Kahn/Selesnick - artists Richard Selesnick and Nicholas Kahn - incorporates photography, painting, sculpture, design, and narrative text. With diverse influences including Italian Renaissance painting, 19th century panoramas, and Sufi tales among them, their images are very complex while graphically elegant, and in dialogue with various traditions of written and visual narrative. The viewer of their elaborate and fantastic scenes may decode the images symbolically and decipher the accompanying texts, yet still remain seduced by an enigma.

The Englishmen Kahn and Selesnick - both born in 1964 - have been collaborating since 1988 : first creating installations combining painted portraits on plaster panels and bread, honey, and wax sculptures displayed in wooden ritual architecture. Tired of working locked up in a studio, they returned to photography on location, experimenting with 360-degree panoramic photographs set in the English countryside, and eventually integrating costumes and sets in vast productions rife with curious anachronisms. In 1996, their first large exhibition of photographic panoramas, The Flight Series, was a body of work that brought to fruition the various components that would become the team´s primary modus operandi: story and history intertwined to weave a personal mythology, accompanied by museological display of found and fabricated artifacts and archives. The Flight Series recounts the story of a fictional expeditionary brotherhood, the Royal Excavation Corps; its visual "documentation" depicted on sepia-toned panoramas appears historically accurate for the era in which the R.E.C. was said to have been active, the 1930s. The exhibition also included two R.E.C. gliders allegedly used in aerial reconnaissance.

1999´s The Circular River, the R.E.C. Siberian Expedition of 1945-46, continued the story of the R.E.C. begun in The Flight Series. Objects purportedly loaned by the Novosibirsk Museum of Ethnography accompanied the show of artificially-aged laser-print panoramas. In this series Kahn and Selesnick made more apparent the latent mysticism present in the first R.E.C. series, depicting a blend of traditional and invented shamanic imagery as the R.E.C encounter Siberian natives, quietly illuminating the R.E.C.´s general activities of flight and exploration as allied with classical shamanic themes such as the soul´s travel between worlds; at the same time, humour is omnipresent, with Russian scientists claiming to have dug up a mammoth and persuading the English to abandon their mission, at least temporarily, in favor of vodka-drinking.

Created in 2000, the series Scotlandfuturebog marks a major shift: the artists use, for the first time, digitally-combined 4 x 5 film shot on location on the Isle of Skye, Scotland; the Beara Peninsula, Ireland; and Cape Cod, US. The black and white images have a new bleakness that echoes the post-apocalyptic scenes they represent: in desolate mountains and bogs, a mysterious population of ambiguous temporality, primitive and futuristic all at once, seems to have survived a disaster. Portraits and allegorical scenes are accompanied by a cryptic text that alludes more than it elucidates.

In response to the black and white of Scotlandfuturebog is the colour of City of Salt (2001), in tones that, like the sepia of the R.E.C. series, recall an archaic photographic process, early color from the origins of photography. If the sets and costumes remind us of the Orientalists of the 19th century, the texts by the artists and Sarah Falkner and Erez Lieberman - parables on power, spiritual inquiry, and ethical dilemmas - find an echo with the current uneasy relationships between East and West. The eponymous city made of salt is depicted by means of a complex ceramic model.

The Apollo Prophecies (2004), is perhaps the artists´ most ambitious project in terms of staging: created in collaboration with students at Toni Morrison´s Atelier Program at Princeton University, the project necessitated the building of complex sets and props, and the creation of original costume. In a narrative style directly inspired from the cycle painted by Masaccio for the Brancacci chapel, the panoramas - shot for the first time entirely digitally - and the accompanying text describe the landing on the Moon, in the 1960s, by astronauts and cosmonauts, and their encounter with members of another expedition from Earth that had arrived at the beginning of the 20th century.

Kahn/Selesnick are included in numerous public and private collections in the United States and in Europe. A number of their major projects have spawned book projects specially-designed by the artists in keeping with the aesthetics and concepts particular to each project. The exhibition at Aeroplastics Gallery is a rare opportunity to experience the totality of a complex vision and its elaborate manifestations.